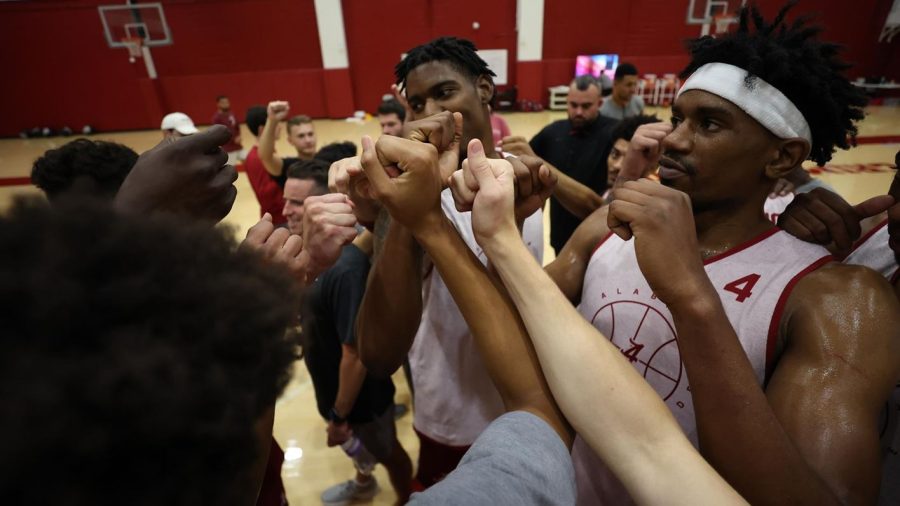 As the Alabama men’s basketball team prepares to depart for a European tour, head coach Nate Oats offered a closer look at a rebuilding program with two separate practice viewings.

After five players transferred and three players went pro last season, the Crimson Tide has no shortage of new faces in Tuscaloosa.

On Friday, it was junior Darius Miles that stole the show during a private media viewing. The 6-foot-6 forward flashed with defensive prowess and effort on the perimeter.

Offensively, the Washington, D.C. native displayed an improved handle and knocked down plenty of shots.

However, it was Miles’ leadership on the court that caught the attention of spectators.

“He’s been the vocal leader so far,” Oats said. “He’s outgoing, he’s talkative, it makes sense that he leads.”

While Burnett shined, it was five-star point guard Jaden Bradley and five-star forward Brandon Miller that captured the eyes of Crimson Tide fans in Coleman Coliseum.

Bradley, a 2021 McDonald’s All-American, tallied 19 points — guiding the “Crimson” team offensively with his court vision and ability to get to the cup at will.

Miller, the No. 15 recruit in the country according to 247sports’ composite rankings, had the best day of any player — dropping 30 points while flashing an array of mid-range pull-ups, contested threes, spot-up threes and cuts to the basket.

Defensively, Miller’s seven-foot plus wingspan wreaked havoc in the passing lanes and on the glass — pinning two against the board during the scrimmage’s final minutes.

As for team chemistry? Oats believes it to be better than last year’s squad.

“They think everyone’s really in for this team,” Oats said.

The Crimson Tide will begin their foreign tour on August 5 with matchups against Spain’s Select Team, Lithuania Men’s B Team and the Chinese National Team.