Continuing to build: Women’s basketball ready to compete in 2022 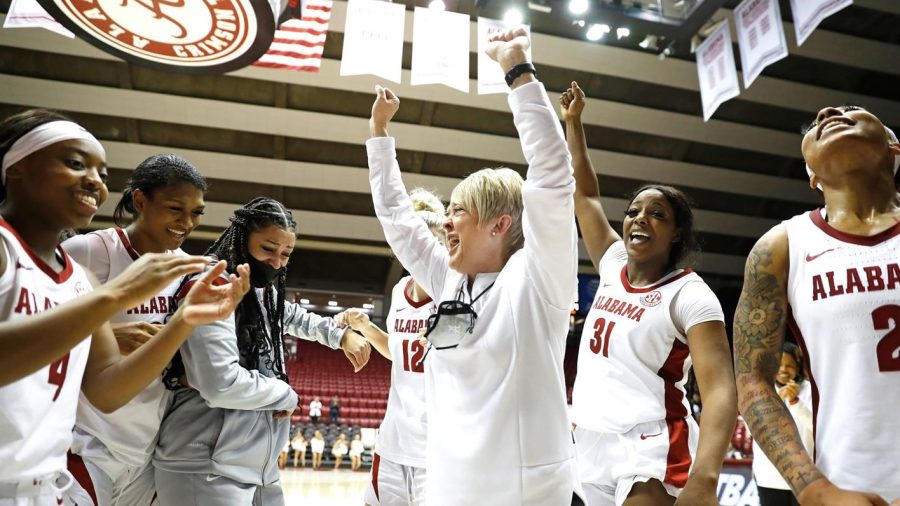 In 2021, the Alabama women’s basketball team made the NCAA Tournament for the first time since the 1998-99 season. The season after, a rocky January effectively ended any hopes of the Crimson Tide making the NCAA tournament in back-to-back seasons.

Most teams would be disappointed with how Alabama’s season ended. But that was hardly the case in the Crimson Tide locker room.

“I think we were proud of the kids considering the January we had with 29 straight days of COVID issues,” head coach Kristy Curry said. “I think our kids played some of their best basketball down the stretch and it kind of gave us some momentum heading into the summer on things we can continue to build and work on.”

Alabama has a sturdy foundation to work with, as all five starters will return to the Crimson Tide next season.

For one player, returning to Tuscaloosa felt like the right choice.

“Honestly, it was just an opportunity I couldn’t pass up,” guard Hannah Barber said. “To be a part of this program for the past four years has been one of the best experiences of my life.”

This offseason is a stark contrast to the offseason prior to the 2021-2022 season. The Crimson Tide lost close to 80% of their production from the 2020-21 season. Former Alabama players Jordan Lewis and Ariyah Copeland transferred to Baylor and Arizona respectively. Jasmine Walker was drafted by the Los Angeles Sparks. While Curry is excited about last year’s starters returning, she is equally excited about the newcomers Alabama has added this offseason.

It’s evident just how much talent Alabama has added to the roster, but the Crimson Tide has also added some great people as well. The energy in the locker room is infectious, something Barber is grateful to be around.

“They’re really fun to be around in the locker room,” Barber said. “They bring a lot of energy, a lot of enthusiasm and I’m really grateful that I have the chance to play with them this year.”

It’s early in the season, but Alabama is already buying into the mentality for this season. Controlling what they could control was the reason for the Crimson Tide’s success down the stretch. That mindset is still around this season, but this time the team is incorporating a proactive approach.

“One thing that we’ve talked about this summer is this idea of earning it like nothing is given to us,” Barber said. “Every day, we have to show up and earn anything that we’re basically going after.”