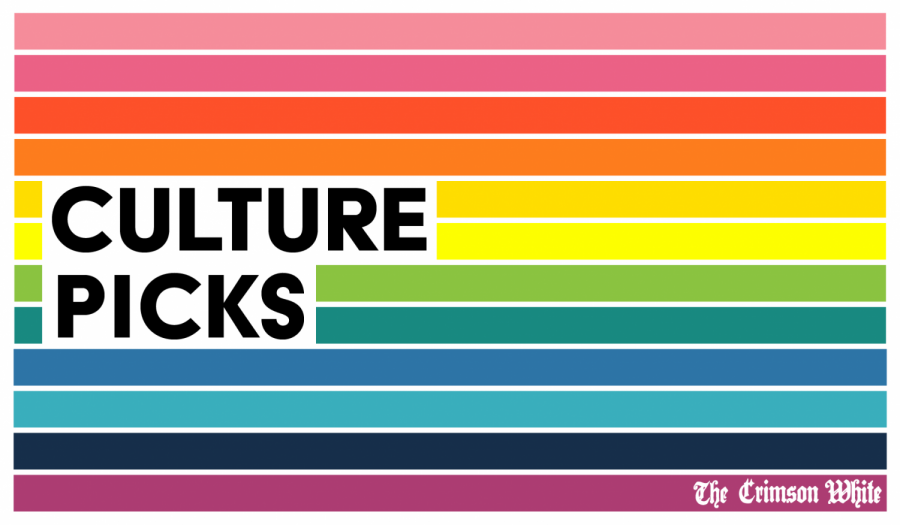 Podcasts have gained popularity in recent years, from ones delving into murder mysteries and celebrity gossip to ones that tell you the daily news and help you better your life. According to a March 2022 study done by Infinite Dial, 62% of Americans have listened to podcasts this year, and 38% have listened to one in the past month.

With The Crimson White being home to writers, designers, photographers and more, it’s no wonder that we have an interesting and unique set of podcast recommendations.

“Charli XCX’x Best Song Ever” is a BBC Radio 1 podcast hosted by rising pop icon, Charli XCX. Throughout her series she interviews a multitude of personalities, including Phoebe Bridgers and Edgar Wright.

When interviewing her guests, XCX explores the playlists of their lives. They discuss albums that have shaped them as people and songs they would want to be played at their funerals. Her signature questions include asking what their best song ever would be for certain life events or interesting situations, like a car chase. It’s a podcast you should listen to if you’re interested in finding new tracks to soundtrack your life from Charli and her fabulous friends and celebrity guests.

This limited-run series hosted by Mary Scott Hodgin and WBHM investigates the thousands of individuals trapped in Alabama’s overcrowded and understaffed prisons.

Hodgin’s interviews and research contextualize the immense threats of violence, sexual abuse and overdoses that have brought Alabama’s prisons to a boiling point. According to Alabama Political Reporter, the Department of Justice sued Alabama’s prisons in Dec. 2020 over practices “deliberately indifferent to the serious and systematic Constitutional problems” that they cause.

Hodgin interviews people impacted by the system and individuals in charge of Alabama’s prisons to shed light on the past, present and future of the Alabama Department of Corrections. Failure to learn from the past and improve conditions could make federal intervention inevitable.

Each season of “Dissect,” hosted by Cole Cuchna, consists of the analysis of one influential modern album, usually hip-hop or R&B, as each episode of the weekly podcast analyzes one song.

It can help listeners understand and appreciate more of the intricacies and thought behind several of their favorite albums, including “Lemonade” by Beyoncé and other albums by artists such as Kanye West, Kendrick Lamar, Mac Miller, and the one and only Ms. Lauryn Hill. Overall, it’s really easy to appreciate the podcast from both a scholarly perspective and a musical perspective and using both perspectives can reward the audience with what has probably been Brown’s best podcast experience.

“Your honor, your honor, I’m slaying.” Two Internet personalities that have been posting for almost a decade, Enya Umanzor and Drew Phillips, are the hosts of “Emergency Intercom.”

There is no real structure to the episodes, mostly they spend the hour talking about random recent events or sharing their thoughts. At the end of every episode, they share a piece of media and discuss it to end the hour.

They’re transparent about mental health issues, including the effect social media has on their lives, while also discussing silly things like how Phillips met Bella Hadid and how Umanzor has jokingly declared Frappuccino’s to be the drink of the summer.

One of Langley’s favorite running jokes is the religion of Drew, also known as “drewdaism.” He makes up new rules every time it’s brought up, and the listeners’ job is to ensure they’re “spreading the drewth” every day. Give them a listen if you’d like to just sit back and laugh, and don’t forget to spread the “drewth.”

Every Little Thing is a podcast created by Gimlet Media and hosted by Flora Lichtman who invites a myriad of guest interviewees for different episodes.

Listeners call in their most random “burning” questions, and the podcast features experts who answer them. Past topics include how nail polish colors get their names and why auctioneers speak the way they do. With so many questions to be answered, the listener is sure to learn something new yet totally useless in their everyday life.

Bonner’s favorite episode is one in which the host discusses with a retired staff member what it is like to live in the White House.

Some children never grow out of their mythology phase, including Liv Albert, a self-proclaimed “30 something millennial with a penchant for cursing and a feminist attitude.”

Albert decided to channel her ancient love and classic degree into making a deeply researched and entertaining podcast. “Let’s Talk About Myths, Baby!” is the result of her passion for mythology, and it discusses complex aspects of these ancient stories.

However, Albert isn’t just recounting stories or reading Ovid. She delves deep into the social and cultural meanings of the myths, and she strives to point out injustices and add inclusivity to the characters we all know and love.

Discussing everything from the misogyny buried deep in Pandora’s box to the nonbinary and gender fluid representation in mythology, “Myths, Baby!” explains how myths have been used for centuries as ways of cementing cultural ideologies.

Albert brings new flair to what is often considered a dying field with her humor and modern thinking, making “Myths, Baby!” a must-listen.

“Race Chaser” is a podcast dedicated to “discussing, dissecting and disseminating every single episode of RuPaul’s Drag Race.” The show starts at the very beginning but takes on whatever season is currently happening on TV.

Along with the deep dive into the behind-the-scenes of RuPaul’s Drag Race — the U.S., U.K. and Canada series — the podcast discusses other pop culture phenomena, “Hot Goss,” a bit of politics and even offers a bit of advice to listeners’ emails.

Rather than sensationalizing violent acts, “True Crime Daily” creates a space for ex-law enforcement officers and grieving family members to criticize inaction and negligence at the hands of police, courts or loopholes in the law.

Several cases covered by “True Crime Daily” ultimately went on to spark positive changes in criminal law, such as Molly’s Law and The Reagan Tokes Act of Ohio.