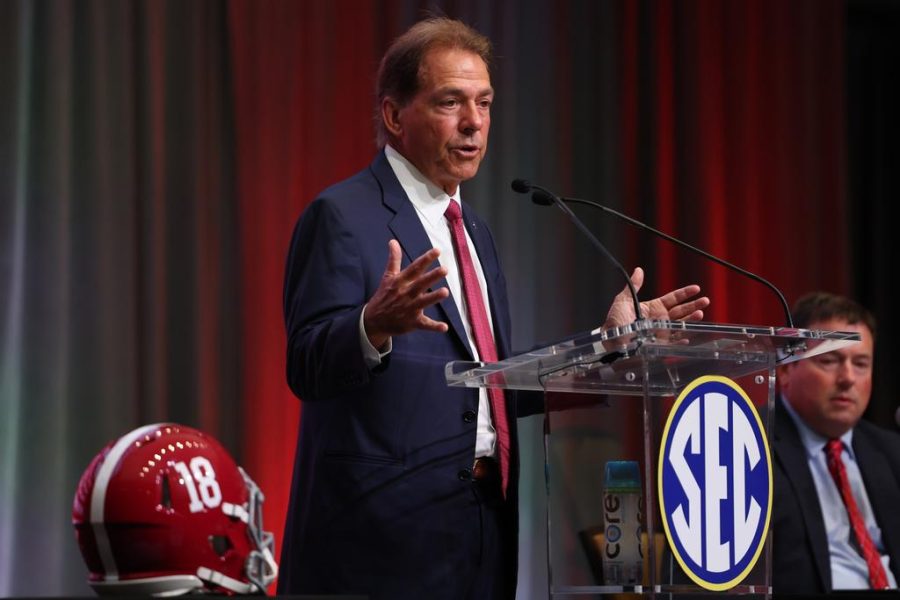 After the dust settled at the 2022 SEC Media Days, the Alabama Crimson Tide are once again believed to be the cream of the crop as the college football season steadily approaches.

It’s become quite the tradition for head coach Nick Saban, who is more than used to the lofty expectations for his team. There’s a reason for this, as the Crimson Tide has won six of the last eight SEC championships and are going for their third in a row in 2022.

Alabama finished atop the polls in a landslide with 158 points to win the SEC, compared to second-place Georgia’s 18 points. All but four believe the Crimson Tide will hoist the trophy in Atlanta, Georgia on Saturday, Dec. 3.

In terms of the western division, Alabama obviously finished on top as well with 1,262 points. Following the Crimson Tide was Texas A&M with 968. Many believe the division will come down to the meeting between Alabama and the Aggies on Oct. 8 at Bryant-Denny Stadium. Texas A&M defeated the Crimson Tide 41-38 in College Station last year.

With good teams come talented players, and 19 Alabama players were selected to the preseason All-SEC teams. The Crimson Tide had a league-high 10 players selected to the first team, including quarterback Bryce Young, running back Jahmyr Gibbs, wide receiver Jermaine Burton, and offensive lineman Emil Ekiyor Jr. on offense. On defense, linebackers Will Anderson Jr. and Henry To’oTo’o, as well as defensive backs Jordan Battle and Eli Ricks made first team. Rounding out the first team was Will Reichard, who was chosen as the First-Team All-SEC kicker for 2022. Along with being chosen for the running back position, Gibbs was also selected in the all-purpose slot.

The Crimson Tide will look to live up to its expectations beginning in 43 days, when Alabama opens its season against the Utah State Aggies on Sept. 3 at Bryant-Denny Stadium.