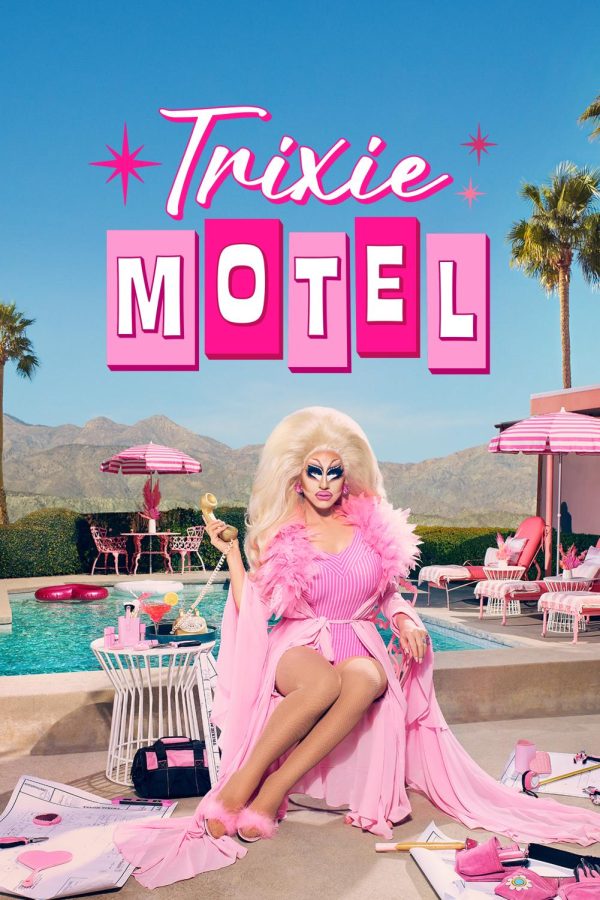 Courtesy of Discovery Plus

When most people think of Trixie Mattel, they may think of the country-singing, pink-clad, life-sized Barbie drag queen made famous by “RuPaul’s Drag Race,” which she would eventually go on to win in All Stars season three. While she seemingly spends most of her time performing on tour, running a cosmetics company and laughing with drag queen Katya on Netflix and YouTube, Mattel has set her sights on what some would consider not-so-glamorous: the motel business.

Discovery Plus’s new show “Trixie Motel” follows Mattel, who sometimes appears out of drag as Brian Firkus, and her partner, David Silver, as they invest Mattel’s fame and money into a rundown motel in Palm Springs, California.

The first episode aired on June 3 and begins with Mattel seeing the pink motel for the first time, which she and Silver bought for $1.9 million. While the initial amount might startle viewers, Silver and Mattel only have $500,000 and five months to renovate seven rooms, the pool, the bar and lounge, and the check-in area to be ready for Pride Month and for Trixie to be done before her next tour starts.

While Mattel might not technically have any renovation or interior design background, it becomes clear that with a little help from some professionals, Mattel’s history with makeup, sewing drag costumes and putting together outfits can easily be translated to home design.

Mattel enlists the help of fashion designer and interior decorator Dani Dazey, who has a colorful, retro maximalist style that pairs perfectly with Mattel’s campy persona. For a project manager, Mattel hires David Rios, a designer and home renovation expert with more than 25 years of experience working in Palm Springs.

With Dazey and Rios by her side, Mattel shows the dilapidated motel to her friend, Lisa Vanderpump, which starts a string of celebrity guest appearances that define the show.

Episode one focuses on renovating the first bedroom, which after Vanderpump buys Mattel a pink lamp with gold flamingoes as the base, is lovingly called “The Pink Flamingo” room. Complete with a hand-painted mural by Mattel, pink and green covering the entire room floor to ceiling, and of course, a pink feather chandelier, Mattel’s first room is a testament to the maximalist, over-the-top style she’s become famous for.

During the episode, Mattel also visits a local gay bar in Palm Springs to announce her new motel to the community, which plays a major role throughout the season in Mattel’s hopes for the motel. Here, she visits with the Old Gays, who are four social media influencers with millions of followers on their joint channels.

The Old Gays are old and gay as their name would suggest, but for many, they represent a seldom-shown era where LGBTQ people and voices were often being silenced. On top of this, the Old Gays have previously talked about the friends and family they’ve lost throughout the years to HIV, making the presence of older members of the LGBTQ community a rarity.

The Old Gays remind Mattel at the end of the first episode about the role Palm Springs has played in LGBTQ history. Located two hours from Los Angeles, Palm Springs became well-known for being LGBTQ-friendly after celebrities and Hollywood stars would escape to the desert oasis for same-sex trysts and privacy, especially during a time when many of them were under contractual agreement to not go further than two hours from Los Angeles.

When Los Angeles was cracking down on gay bars and LGBTQ-friendly spaces, many would travel down to Palm Springs, even if just for the weekend, to enjoy time with friends safely. Then, in 1984, a local hotel owner in Palm Springs opened one of the first AIDS clinics in the country, solidifying the city’s role in LGBTQ history.

Today, Palm Springs is generally known for having lots of elderly people, LGBTQ people and anyone who overlaps between the two.

With this history refresher and a strong drive to become a part of the community, Mattel dives headfirst into episode two, which focuses on “The Queen of Hearts” room. Armed with a paintbrush and several cans of pink and orange paint, Mattel and her friend, comedian Nicole Byer, paint a mural on the wall to look like a playing card. To reach the ceiling, they acquire the help of Very Gay Paint, the business owned by partners Jenson Titus and Nicholas Scheppard, who started painting murals during the COVID-19 pandemic.

Mattel explains that her inspiration with the motel is to create a welcoming space for everyone, which was inspired by her often not feeling comfortable being in drag at hotels when she was traveling on tour.

Mattel is already undoubtedly funny, which is something she’s built her career on, but she only becomes funnier by surrounding herself with funny people. While some of the guest appearances scream comedy, like Britney Broski in episode four and Leslie Jordan in episode six, others are surprisingly humorous without even meaning to be. In episode two, Orville Peck makes several quips about Mattel being bad at country singing. In other episodes, it’s just funny to see whom Mattel has connections to, such as Iggy Azalea, Zooey Deschanel and Belinda Carlisle.

But for fans of RuPaul’s Drag Race, Mattel pulls out all the stops with drag queen guest appearances with personalities like Bob the Drag Queen, Kim Chi, Alaska 5000, Jaida Essence Hall, Mo Heart, and of course, Katya.

With all of her guests, Mattel is easygoing and relaxed, and she even puts most of them to work when they get there. However, the real joy in the show is seeing a different side of Mattel when she’s with Silver and when she visits her family in episode four.

Mattel explains that she’s gotten everything she’s ever wanted in the past few years, and Silver has been nothing but supportive. So even though the motel is named and designed after Mattel, she emphasizes that this is all Silver’s dream, and she wants him to be able to have a dream come true just like she has.

Although the show isn’t without its messes and errors, like when Dazey tries a new method of making cheap flooring and it all cracks, or when the wallpaper comes with a small print they can’t even see, Mattel and her crew chug along, creating spectacular rooms and having fun while doing it.

If you’re feeling ultra-inspired, you can even go stay at the Trixie Motel for a little more than $500 per night, however, most of the rooms are booked throughout the summer. Whether your vibe matches the “Atomic Bombshell” room or the “Yeehaw Cowgirl” room, you’re sure to find something enchanting about the copious amounts of wallpaper, custom beds, shades of pink, and the fun and ease of watching Mattel and her friends make history as Palm Springs’ first drag queen businesswoman.