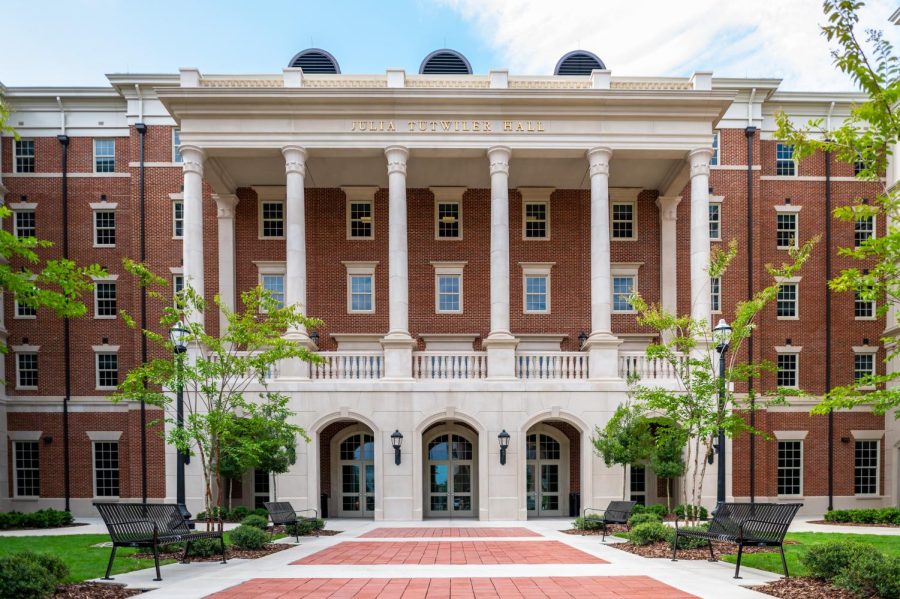 The Crimson White was given the first tour of the new Julia Tutwiler Hall dormitory, which will open at the beginning of August to welcome its inaugural group of freshmen women.

The New Julia Tutwiler Hall is now in its third iteration. Initial construction began in June 2019 after years of planning, and the hall will be ready in time for the first round of early move-in on Aug. 3. Room selection has already been completed, with 100% occupancy for the new spaces according to Dr. Matthew Kerch, executive director of housing and residential communities.

The new residence hall will accommodate 1,284 students in two-person rooms. The rooms will feature private bathrooms. The new occupancy equals the number of beds previously available in the old Tutwiler Hall and Harris Hall. The previous Tutwiler Hall was demolished on July 4 and Harris Hall demolition began earlier this summer.

Resident rooms are single occupancy for resident advisors and double occupancy for students. Individual desks, closet space, storage, and lockable desks are available in each room. Each room also includes a microwave and a mini fridge. Doorbells compliant with the Americans with Disabilities Act are also included for ADA-accessible rooms.

Each floor will offer lounges, study spaces, and community-style residence hall spaces in addition to a community kitchen. Access to the building is designed completely keyless, where an individual’s action card will function as the entrance to the building and the individual room. All the floors feature a distinct color along the ceiling accents and pay homage to the old Tutwiler Hall that also had a representative color distributed along each individual floor.

“Safety and accessibility were key components in design,” said Dr. Matthew Kerch. “Guests will be checked in and escorted by residents while in the building.”

It will take three action card swipes to gain entry to the main building from the street, further enhancing security for students. Additionally, American with Disabilities Act accessibility was considered for access to each facet of the building, Kerch said.

Julia Tutwiler Hall will also include a multi-purpose room, which doubles as a storm shelter capable of holding 1,700 people. Storm doors and drop-down covers for the windows and storm doors can be deployed using a single point panel mounted on the wall. In a power outage, back-up generators will allow for the covers to still be deployed.

The multi-purpose room can be configured to different arrangements to meet the needs of users. The space will be available for event reservations, which would use a separate street-facing entrance to enhance security and separation from the living spaces.

Directly in the center of the building is the main courtyard, which is monitored by security cameras for safety and Wi-Fi covered. Additionally, there is a second-floor balcony with seating that overlooks the courtyard.

Emphasis was placed on the ability to meet student needs with the spaces designed to encourage a sense of comfort and togetherness among the residents.

“Student input was considered for everything from design to outlet placement,” said Kerch. Surveys, student feedback, and resident advisor inquiry were all used to obtain student feedback.

Even the furnishings took years of planning. The University of Alabama Furnishings and Design team and interior designer Leah Shephard worked with multiple vendors to obtain pieces for the project.

“It was a collaborative process with multiple samples and design considerations taken into account,” said Kerch.

In addition to the new resident rooms, multi-purpose space, and community opportunities, the offices for the Office of Housing and Residential Communities will now be housed on the first floor of the building, and will be a stop prospective students make when touring University residence halls.