“The end of a piece of history”: Julia Tutwiler Hall imploded on 4th of July 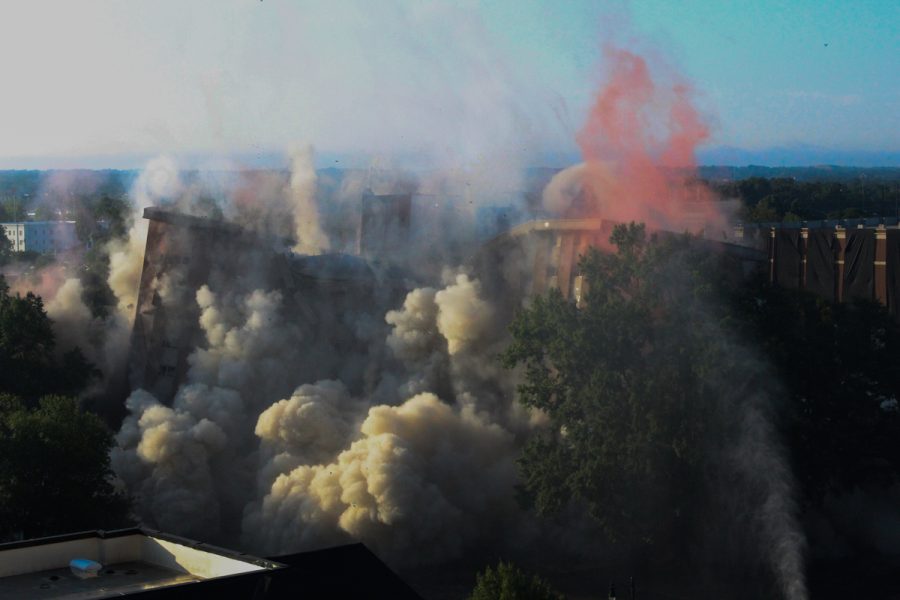 The second iteration of Julia Tutwiler Hall was demolished Monday, over 50 years since it first opened its doors.

Several hundred spectators watched the old Tutwiler Hall come down at 7 a.m., as a thick cloud of smoke rose from the ashes of the building following the implosion.

“I remember when an elementary school was where the [new] Tutwiler building is. There have definitely been a lot of updates and changes in that time frame,” Harris said.

McClendon, while not a Tutwiler resident personally, recalled, “when I was a student it was the primo residence hall on campus. It definitely feels like the end of a piece of history.”

Access to the surrounding areas of the building was limited beginning at 5 a.m. as streets surrounding the residence hall were closed in preparation for the implosion.

When the demolition began, a string of fireballs shot out of the windows on the top floor as “more than 500 pounds of dynamite were used to strategically bring down the building,” according to The University of Alabama communications department.

In conjunction with the explosives, approximately 1,600 holes were drilled into structural columns to aid in the implosion, according to The University. D.H. Griffin Wrecking Company and Dykon Explosive Demolition Corporation oversaw the demolition.

The implosion resulted in 30,000 tons of concrete waste. The rubble will be hauled away to a recycling center to be crushed and used for future campus projects. Cleanup began immediately following the demolition.

The site of the recently demolished residence hall will be turned into a green common space with winding pathways from the new Tutwiler Hall to the Supe Store. The outdoor space will also feature a Tutwiler Promenade with personalized pavers purchased by alumni and friends.

The space will be close to completion by the start of fall classes, according to the University.

Tim Leopard, senior associate vice president for campus development, was enthusiastic as he spoke about the demolition’s successful completion.

“[Tutwiler’s] demolition was the culmination of a 10-year process for us,” he said. “The University works really hard to minimize the impact to the campus community. Typically, everyone is off to the beach, it’s a good time to shut roads down, and not have people here and works out well. We like to go big at The University of Alabama.”

“It’s very appropriate that out of the dust of the old Tutwiler that the new Tutwiler is right there. We like that symbolism,” Leopard added.

“I think it’s a great new beginning for the University,” said Josh Langley, a senior majoring in advertising and public relations. “They opened this new Tutwiler building, away with the old, allowed people to get a brick of the old one if they wanted. It’s just a life cycle.”

Tutwiler Hall was the second iteration of the girls’ resident hall. The first was built in 1914 where Rose Administration now stands.

The building was named for Julia Tutwiler, who was known as the mother of co-education in Alabama. Tutwiler successfully lobbied The University of Alabama board of trustees to allow female students to attend the university. The first women, Bessie Parker and Anna Adams, were admitted in 1893.

Steven Hood, interim vice president for student life, discussed the many years of planning that lead up to this point.

“We’re really excited for the women the new Tutwiler is going to serve,” Hood said.

Hood said that despite all other UA dorms being co-ed, Tutwiler will remain all-female due to the residence hall’s popularity.

“It’s popular by demand, a type of facility our students are looking for,” Hood said. “We’ve seen previous students discuss their memories and experiences and we know those same memories will continue for many years to come.”

The aftermath of the Tutwiler demolition.