Hitt, Pinckney shine in much-needed Alabama win over No. 14 Georgia 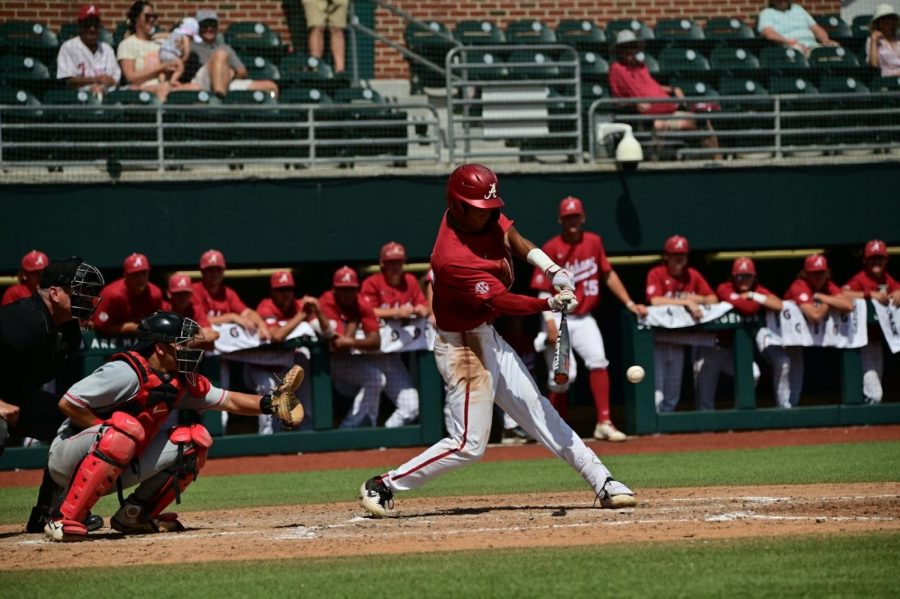 Alabama right fielder Andrew Pinckney (21) swings at a pitch in the Crimson Tide’s 3-0 win over the No. 14 Georgia Bulldogs on April 24 at Sewell-Thomas Stadium in Tuscaloosa, Alabama.

After Saturday night’s loss, Alabama head coach Brad Bohannon said that Sunday’s meeting with the No. 14 Georgia Bulldogs (28-12, 11-7) was the biggest game of his players’ lives.

The team more than lived up to expectations, taking down the Bulldogs 3-0 at Sewell-Thomas Stadium Sunday afternoon and avoiding the sweep.

Sunday was the first shutout against an SEC opponent for the Crimson Tide since April 2019.

“I told the kids before the game that we really needed to get a win today,” Bohannon said. “We weren’t going to run from it or hide from it. You can’t get swept at home this deep in the season.”

“Grayson is kind of the story of the game,” Bohannon said. “He was awesome. Really proud of him and the way he is progressing. He was fabulous.”

The Crimson Tide (24-17, 9-9) were once again relatively quiet on the offensive end, accumulating just seven hits. But when Alabama hit the ball, they did it with power.

First baseman Drew Williamson hit a solo shot in the fourth inning to put the Crimson Tide up 1-0 early. Right fielder Andrew Pinckney was a star on both sides of the ball. Pinckney went 3-for-4 with a two-run homer in the fifth and made an outstanding throw from right field to third base to end an offensive threat.

“Every day is a new day,” Pinckney said. “After losing a couple of games straight, you’ve just got to go out there and compete. The mood in the locker room is pretty neutral. We’re just going out there and not trying to do too much. We’re just trying to win each game.”

Shortstop and leadoff hitter Jim Jarvis finished the weekend 0-for-12. Third baseman Zane Denton, who leads the team in OPS, went 1-for-13 against Georgia, and left fielder Tommy Seidl continues to struggle in conference play, hitting .179 against SEC opponents.

Nevertheless, Alabama stole a game from the 14th ranked team in the country Sunday afternoon and can breathe a sigh of relief.

“We’re still the same team that won nine in a row,” Bohannon said. “We’re still the team that swept Ole Miss. There’s so many ups and downs individually and collectively in this sport at this level. You have to try really hard to play one pitch at a time.”

Next up will be four games on the road, beginning with a trip to Birmingham for a rematch with the Samford Bulldogs at Joe Lee Griffin Field on Tuesday, April 26, at 6 p.m. CT. The Crimson Tide beat the Bulldogs 10-1 on April 5 in Tuscaloosa.

Next weekend will be a road date with the South Carolina Gamecocks in Columbia. That series will be Alabama’s first to begin on Thursday this season.