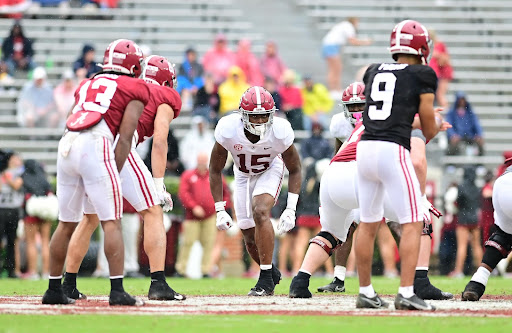 Alabama linebacker Dallas Turner (15) prepares to rush the quarterback in the annual A-Day game on April 16, at Bryant-Denny Stadium in Tuscaloosa, Alabama.

It was a rainy day at Bryant-Denny Stadium Saturday afternoon, and the play on the field during the annual A-Day Game was just as sloppy. In a game where the final score doesn’t matter, the “White” team defeated the “Crimson” team by a final score of 25-7.

“I think today was an opportunity for players to impress,” Alabama head coach Nick Saban said. “It’s kind of showtime for them to see who would elevate their game, and go out there and compete and play winning football. I think we probably had quite a few guys that did that today. All in all, I was pleased with the effort, and I am pleased with the progress we’ve made in the spring.”

In the second quarter, quarterback Jalen Milroe fired a ball down the sideline to Christian Leary on a 52-yard score. And in the third quarter, Georgia Tech transfer running back Jahmyr Gibbs broke free on a 75-yard touchdown run.

Saban said Gibbs brings a lot to the running back position.

“Fast is fast,” Saban said. “I think he [Gibbs] gives us something at the running back position because he’s really good at pressing the holes, but he has a great burst to get to top speed quickly. A very good running back, a very good receiver and a very good third down back.”

The offensive performances were sluggish for the projected No. 1 Crimson Tide, but the team still has the spring and summer to prepare for the 2022 season.

Bryce Young started for the Crimson team. The 2021 Heisman Trophy winner went 14-for-29 with 153 yards and an interception. His offensive line didn’t help much, allowing the quarterback to be “sacked” — for the sake of this game, touched — 10 times.

The offensive line will cope with the losses of last year’s starting tackles, Evan Neal and Chris Owens. Young and the first team offense went 3-for-11 on third downs and never made it into the red zone.

Safety Jordan Battle baited Young into a deep throw, and made him pay with an interception. Milroe threw a similar ball, and sophomore defensive back Kristian Story picked it off.

Whenever there is intrasquad scrimmage, the negative moments are also positives.

The first-team front seven feasted on Saturday, taking down Young over and over again. Linebacker Dallas Turner picked up three sacks, and Will Anderson Jr. was one of three guys with two sacks.

“One thing that impacted the game as much as anything was the front seven on defense is probably a little further ahead than the offensive line,” Saban said. “With two starters out, and only one starter back from last year, we’ll certainly try to improve on that.”

Linebacker Jaylen Moody has been a big talking point all offseason. After putting his name in the transfer portal, the senior decided to stay and take over for Christian Harris. Moody was sensational on Saturday, finishing with nine tackles — the most on the White team — and a sack.

Despite the conditions, the special teams looked great. The White team went 6-for-6 on field goal attempts, including three from Will Reichard and three from Jack Martin. All of Reichard’s makes were from more than 40 yards out.

“I was really pleased with the specialists and the way they executed today,” Saban said. “I think it was really tough conditions. One of the things we didn’t do all spring was have ‘wet ball’ practice. I do think that was probably an issue for throwing and catching the ball.”

The sad part about A-Day is the realization that the start of the college football season is still five long months away.

“I guess I won’t see you for a while, which will be one of the saddest parts of spring practice being over,” Saban said sarcastically.

With spring practice coming to an end, the Crimson Tide will now move into the next stage of the offseason, with summer camp starting soon. Alabama will be back in Bryant-Denny Stadium on Sept. 3, when the Crimson Tide open their season with the Utah State Aggies.