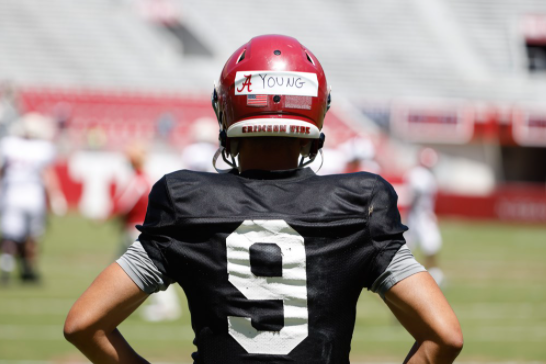 Alabama quarterback Bryce Young looks on during the Crimson Tide’s scrimmage on April 9 at Bryant-Denny Stadium in Tuscaloosa, Alabama.

It’s been 94 days since the Alabama Crimson Tide fell short in the College Football National Championship at Lucas Oil Stadium, where the Georgia Bulldogs beat Alabama for the first time since 2007 and claimed their first national championship title since 1980.

Now that the tears and the dust have settled, the Crimson Tide are revving up the engines. As always, that starts with the annual A-Day game at Bryant-Denny Stadium. One team wears crimson, the other white, and the quarterbacks wear black so defensive players stay away.

From year to year, the results of A-Day are hit or miss. Some players that show out turn out to be nonfactors, and some future stars don’t see the field.

In last year’s game, wide receivers Agiye Hall and Traeshon Holden both starred. Hall appeared in three games in 2021 and has since transferred. Holden put together less than 250 yards last season. Quarterback Bryce Young didn’t look spectacular in the 2021 A-Day game, but ended up winning the Heisman Trophy later that year.

“I think spring ball is the time when you’re trying to develop your team,” Alabama head coach Nick Saban said. “I think the biggest thing is seeing the experience and growth of the players that are involved in the spring game. It doesn’t really matter. This is just a part of the process.”

Young will see playing time on Saturday, but there is excitement for who comes behind him. Sophomore quarterback Jalen Milroe has opened many eyes in spring practice. He is the definition of a dual-threat quarterback, clocking in as one of the fastest guys on the team. Saban said Milroe is “doing some really good things.”

Another name to remember is true freshman quarterback Ty Simpson, who is the No. 3 quarterback in the class of 2022 from Martin, Tennessee.

“He’s really conscientious, really trying to learn, but just needs to continue to get more and more opportunities in practice so that he can gain the confidence that he needs to be able to go out there and play,” Saban said. “I’m encouraged by the progress both of those guys have made.”

The offense will also have two fresh faces, both coming from schools in the state of Georgia. Wide receiver Jermaine Burton and running back Jahmyr Gibbs transferred in from Georgia and Georgia Tech, respectively.

Burton caught eight touchdowns for the Bulldogs in the last two years before coming to Tuscaloosa. Gibbs was the bright spot on a struggling Yellow Jackets team, compiling 1,974 yards from scrimmage and 13 touchdowns in two seasons in Atlanta.

Saban said Burton had “a really good spring” and that he’s been “very productive.”

Like many Alabama fans, Saban is concerned with the other players around Burton. A talented but young group will try to make up for the losses of both John Metchie III and Jameson Williams, who are both projected NFL draft picks later this month.

“We need for everyone else [other than Burton] to sort of play with a little more consistency,” Saban said. “[Burton] has been a good addition for us, and hopefully we can continue to improve around him.”

Unlike the wide receiver position, the Alabama defense has experience from top to bottom. Six of the 11 starters that will line up on defense are seniors. Safety Jordan Battle and linebacker Henry To’oTo’o will stay at the Capstone to chase unfinished business.

Linebacker Jaylen Moody, who has seen limited time while at Alabama, returned to the Crimson Tide for his senior season after putting his name in the transfer portal. Moody is expected to start next to To’oto’o in the Will linebacker  role.

“I really just came back because this is where I want to be,” Moody said. “Going into my last year, I want to make an impact. Having a chance to see Brian [Robinson Jr.] and how he handled last season helped me to stay the course. When my time comes, I can be ready for any situation. I’ve been here for four years now. I’ve learned the defense and grown. I’ve spent a lot of time just trying to go through the process. It’s time. Alabama has transformed me into the player and man I am today. The sky’s the limit.”

This will be the last look at the Crimson Tide until the Sept. 3 opener against Utah State. Unlike in 2021, the A-Day game is once again free for the public. Thousands of Crimson Tide fans that don’t always get to see their favorite team play will pour into Bryant-Denny Stadium on Saturday, April 16, to watch a college football practice.

“One of the things that helped this thing get off the ground was the first A-Day game,” Saban said. “For us to have a great crowd on Saturday sends a huge message. I know it’s a holiday weekend. Sorry the calendar worked out this way. The players love playing for you, so we would appreciate it if everyone came out and supported the team.”