Baseball sweeps No. 9 Ole Miss in Oxford for the first time since 1997 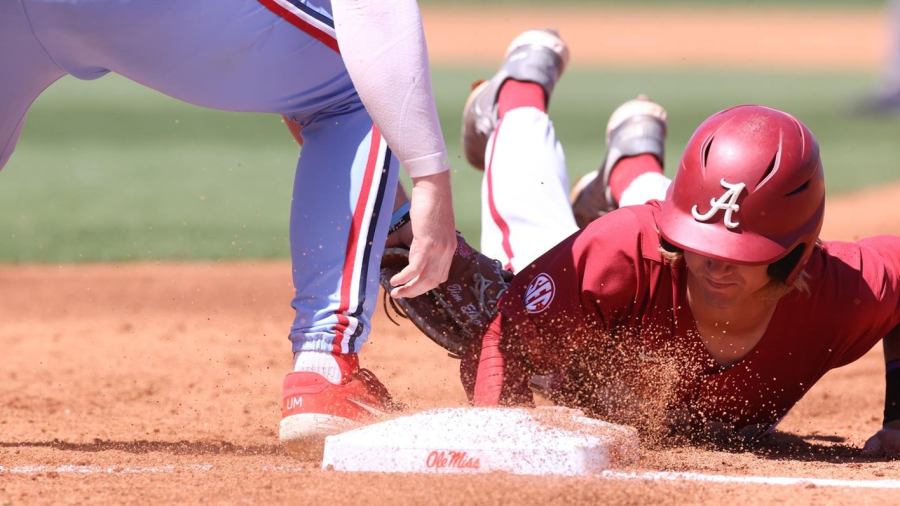 Alabama shortstop Jim Jarvis (10) slides into first base on a pickoff attempt in the Crimson Tide’s 7-4 victory over the No. 9 Ole Miss Rebels on April 10 at Swayze Field in Oxford, Mississippi.

The Crimson Tide have now won seven of their last eight games — and five of their last six against SEC opponents — after defeating the No. 9 Ole Miss Rebels 7-3 to complete the series sweep on Sunday at Swayze Field.

The series win is the first in Oxford since 2004, and the first sweep in Mississippi since 1997.

The Crimson Tide had four batters with at least two hits. Third baseman Zane Denton and right fielder Andrew Pinckney both homered and doubled. Left fielder Tommy Seidl also had a round-tripper in the seventh. Denton had three RBIs.

Alabama started and finished innings well. Alabama’s leadoff hitter reached base safely in six of the nine innings, and five of the seven runs scored by the Crimson Tide came with two outs.

Hunter Hoopes and Landon Green pitched a combined 2.2 scoreless innings out of the bullpen.

“This was another great, well-rounded performance by our club today,” Alabama head coach Brad Bohannon said. “Grayson Hitt gave us the best start of his career, and Hoopes and Green were outstanding out of the bullpen. We are getting offensive production up and down the lineup, and we are playing with great energy. I’m really happy for our kids.”

Alabama will come home for a brief visit with the Belmont Bruins on Tuesday, April 12, at 3 p.m. CT before taking a trip to Knoxville for a series with the No. 1 Tennessee Volunteers at Lindsey Nelson Stadium.

The Volunteers are 31-1 and have won 23 straight games. Tennessee is off to the best start in SEC history, beginning conference play with four sweeps at 12-0.

First pitches will be Friday at 5:30 p.m. CT, Saturday at 5 p.m. CT and Sunday at noon CT. Matches against the Bruins and the Volunteers will be on SEC Network+.