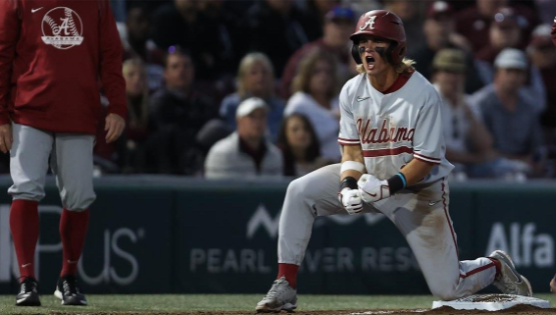 Alabama shortstop Jim Jarvis (11) shows excitement in the Crimson Tide’s 7-4 win over the No. 9 Ole Miss Rebels on April 8 at Swayze Field in Oxford, Mississippi.

Alabama controlled the contest from start to finish, taking the lead for good in the third inning. The Crimson Tide are now .500 in conference play at 5-5.

“I’m really proud of our team, that was one of our best efforts of the year,” Alabama head coach Brad Bohannon said.

It should come as no surprise at this point in the season, but starting pitcher Garrett McMillan was once again phenomenal on the mound for Alabama, tying a season-high seven innings pitched. At 112 pitches, McMillan allowed just one earned run on three hits, and struck out seven. Southpaw Brock Guffey pitched 1.1 innings, allowing a home run to Rebels left fielder Kevin Graham in the ninth. Right-hander Dylan Ray came in and recorded the final two outs on two pitches to put the Rebels out of their misery.

“We had guys on in the top of the first, had a chance to get a big hit, and we didn’t do it,” Bohannon said. “We come out and go E5, walk, walk — I’m sure some of our fans started rolling their eyes — but Garrett [McMillan] got out of it and really settled in. He gave us an outstanding effort, and then Brock [Guffey] and Dylan [Ray] did great out of the pen.”

The Crimson Tide offense put together a strong performance as well, tallying 12 hits. Every batter in the Alabama lineup reached base at least once. Since returning from injury last weekend, designated hitter William Hamiter has made a vast difference for the Crimson Tide. That continued on Friday night, with Hamiter recording three base hits and an RBI. Shortstop Jim Jarvis also had three hits on the night and crossed the plate three times. First baseman Drew Williamson only had one hit, but he finished the game with three RBIs.

“We had a lot of offensive production tonight, too,” Bohannon said. “This was a good win for us, going on the road and beating a great Ole Miss team on Friday night in the first game of the series, so I’m really excited for our guys.”

The highlight of the night came out of right field in the fifth inning. On a fly out by Ole Miss shortstop Jacob Gonzalez, Andrew Pinckney beat the runner attempting to advance, firing the ball across the diamond to third baseman Zane Denton in time to complete a double play to end the inning.

The Crimson Tide will look to secure their second consecutive series win on Saturday, with first pitch coming at 2 p.m. CT on SEC Network+. Jacob McNairy (4.30 ERA) will get the start.