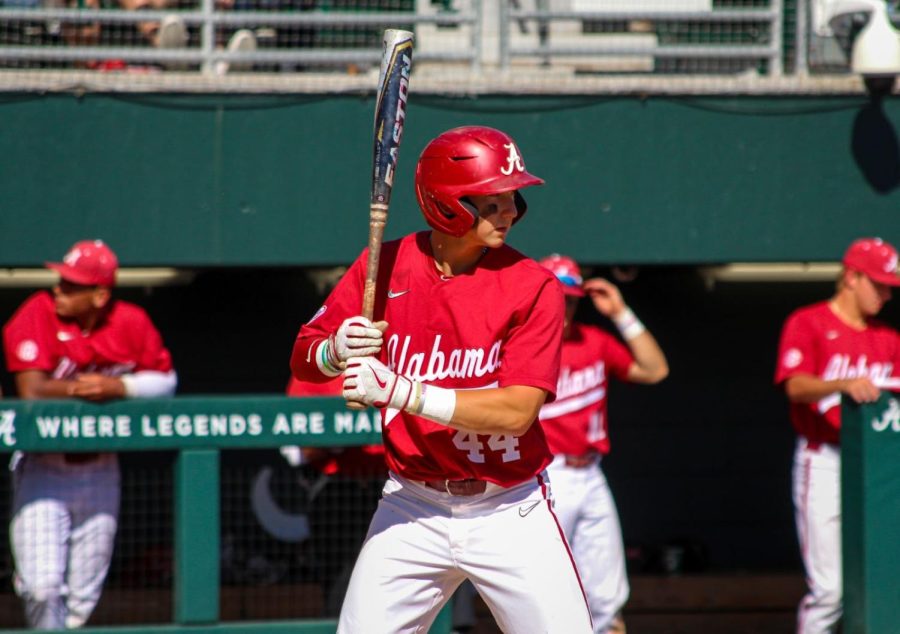 Alabama third baseman Zane Denton (44) takes an at-bat in the Crimson Tide’s 8-4 win over the Texas A&M Aggies on April 3 at Sewell-Thomas Stadium in Tuscaloosa, Alabama.

After losing back-to-back series to No. 14 Florida and Mississippi State, the Alabama Crimson Tide won their first SEC series of the season, defeating the Texas A&M Aggies (16-11, 4-5) 8-4 in the rubber match on Sunday afternoon.

“Really glad to get a series win,” Alabama head coach Brad Bohannon said. “After losing on Friday, I’m really proud of how our kids responded. When you play at home, you need to win those series. We played really good this weekend. We certainly made some mistakes, but I think all three days we did a lot of good things.”

The Crimson Tide (17-12, 4-5) tallied five hits and five runs in the fourth inning to take control of the game. Second baseman Bryce Eblin went 4-for-5 with an RBI double. Third baseman Zane Denton was back to his usual self, going 3-for-4 with a double and two RBIs. In his first start since late February, designated hitter William Hamiter had two RBIs. First baseman Drew Williamson also had two hits, including a double.

Denton, who was 0-for-9 this weekend coming into Sunday’s game, wasn’t satisfied with how he played the last two days.

“It felt really good,” Denton said. “I wasn’t happy with my performance until today, but I tried to just let go of the result and try to simplify my approach and put the ball in play. Luckily, it worked out today.”

Lefty Grayson Hitt started the game for Alabama, but his inability to consistently throw strikes shortened his stay on the mound. Hitt threw 85 pitches in just four innings, working through a lot of long counts. He allowed five hits and two runs off a two-run homer by Texas A&M third baseman Ryan Targac in the top of the second. Hitt struck out four Aggie hitters.

“We’re doing a lot of good things on the mound,” Bohannon said. “I think we’re getting some guys in some roles that they’re a little more fit for, and that’s making us more efficient.”

After Friday night’s loss to the Aggies, Bohannon said that his team needed to “put it all together.” Sunday was the complete team effort that he was looking for. Now sitting at 4-5 in the SEC, Alabama has many challenges ahead. The next two weekends will be road dates at No. 10 Ole Miss and No. 1 Tennessee, followed by a home series with No. 23 Georgia.

First, the Crimson Tide will play one more in the homestand, with the Samford Bulldogs coming to Sewell-Thomas Stadium from Birmingham. Alabama and Samford are set for Tuesday, April 5, at 6 p.m. CT on SEC Network+.

“We haven’t been very good at all on Tuesday’s the last five weeks,” Bohannon said. “I just really want to play some good baseball on Tuesday, and build some consistency. It’s a tough SEC road ahead of us.”