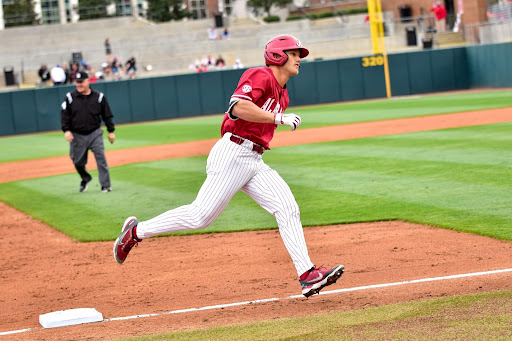 After falling midweek to UAB, another test is ahead for the Alabama Crimson Tide (13-9, 1-2) as they head to Starkville, Mississippi, to take on the Mississippi State Bulldogs this weekend.

The Bulldogs (13-9, 1-2) are the defending national champions, claiming the College World Series title in 2021. It was the first championship in any sport in history for Mississippi State University.

The Bulldogs lost a lot of talent from last season’s roster, which finished with a 50-18 record and a trophy. Tanner Allen and Rowdey Jordan combined for 21 home runs and 111 RBIs at the top of the lineup. Mississippi State also lost a lot of experience on its pitching staff, and this has been evident in the team’s results this season.

Starting the season ranked No. 4, the Bulldogs have fallen completely out of the rankings this week following a series loss to the No. 17 Georgia Bulldogs last weekend.

The Crimson Tide didn’t have quite the expectations that Mississippi State did, but they have been a little disappointing at times. Alabama has already lost games to UT Martin, North Alabama, Southern Miss and UAB. But the Crimson Tide believe they can compete with the SEC’s best after being a few timely hits away from a series win over No. 8 Florida.

It won’t be easy for Alabama in Starkville. Dudy Noble Field is known as one of the hardest places to win in the country, with the stadium drawing sizable crowds every game.

“Playing on the road in the league is awesome,” Crimson Tide head coach Brad Bohannon said. “Mississippi State has a ton of tradition. They’re the defending national champs. They have a great team and a lot of fans. It’ll be a great atmosphere, and we’re really excited for the challenge.”

Alabama first baseman Owen Diodati, who has homered in back-to-back games, believes that his team is built for games like this.

If there was ever a time for the Crimson Tide to steal a few road games in the SEC, it’s right now against the struggling Bulldogs.

Mississippi State swept the Crimson Tide in Tuscaloosa in May last season on its way to its first national title.