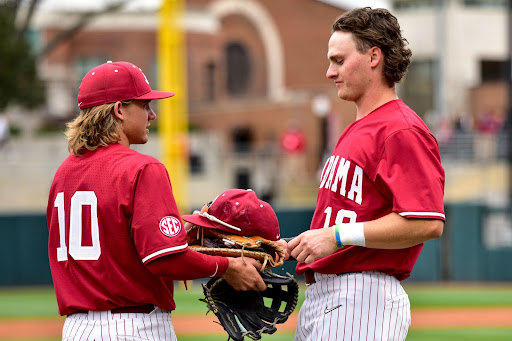 The Crimson Tide are now 3-4 in their midweek matchups, including losses to UT Martin, North Alabama, Southern Miss and UAB.

Alabama led 4-3 going into the seventh inning, but after back-to-back innings allowing one, the Blazers broke the tie in the bottom of the eighth.

“We didn’t do enough to win,” Alabama head coach Brad Bohannon said. “We’re not a very good offensive team right now, and when you’re not very good offensively you’re going to be in a lot of tight games. That’s a lot of pressure to play really clean.”

Freshman right-hander Ben Hess has pitched the last three midweek games, and it hasn’t gone well. Hess pitched two innings Wednesday, allowing one hit in the form of a two-run shot that put the Blazers up 2-0. He struck out four.

The Crimson Tide lineup flipped on Wednesday. The usual top-heavy order was strongest at the bottom.

Alabama’s top-5 hitters went a combined 2-for-20 at the plate. Designated hitter Owen Diodati homered in the sixth.

Once again, the performance wasn’t good enough to beat an inferior opponent. The Crimson Tide went 7-3 in midweek games in 2021 and made the NCAA Tournament as one of the final at-large teams. At this season’s pace, Alabama will finish the season far from the bubble.

“We gave up five runs tonight,” Bohannon said. “In the first inning we walked the second batter, the third batter hit a home run. We made two errors in the infield to the first batter in the inning, and both of those runners end up scoring. And when you’re not as good as you need to be offensively, you can’t make mistakes like that.”

The Blazers pitched by committee on Wednesday, using eight arms to get the job done. Seven of the eight allowed just one run in seven innings.

UAB took care of business when it mattered. The Blazers hit .375 with runners in scoring position.

First baseman Josh Sears had a big day for UAB, going 2-for-4, with a two-run home run and a double.

Following the defeat, Alabama will take a weekend trip down Highway 82 to take on the defending national champions, the Mississippi State Bulldogs. The Bulldogs fell out of the rankings this week, starting the season at 12-9.