No. 6 Alabama opens up NCAA Tournament play with No. 11 Notre Dame in the Round of 64 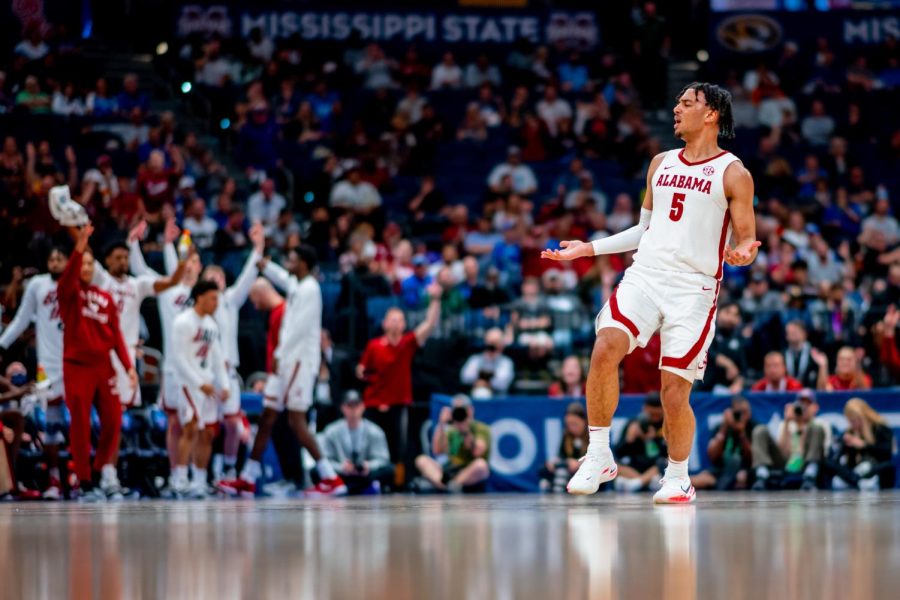 Alabama guard Jaden Shackelford (5) reacts to a made jump shot against Vanderbilt in the second round of the SEC Tournament on March 10 at Amalie Arena in Tampa, Florida.

The moment has come. There is no more room for error. If you lose, your season is over.

The Alabama Crimson Tide has had one of the more inconsistent seasons of any team in college basketball, but it still has everything in front of them. For the first time since 2006, the Crimson Tide has made back-to-back trips to the NCAA Tournament.

“This has been an unbelievable season,” Alabama head coach Nate Oats said. “Let’s not forget that we’re at a place that is changing the culture of men’s basketball. It’s been 16 years since they’ve gone to back-to-back NCAA tournaments. The sky is not falling. We’ve had an unbelievable year. We have a chance to make an unbelievable run to cap the year off really well.”

If the Crimson Tide is to have success in the “Big Dance,” there’s no surprise where it will come from.

“We’re going to go as our guards go,” Oats said. “We’ve kind of gone that way all year.”

That includes guard Jahvon Quinerly, who has embodied the inconsistency of the Alabama basketball team. But when he’s at his best, he’s one of the best.

“When he’s on his game, he’s as good as any point guard in the country,” Oats said. “And I think he’s been locked in these last 3-4 weeks.”

Quinerly is averaging 15.6 points per game over the last month, and his 3-point shot is coming along fast.

On the other hand, guard Jaden Shackelford has struggled at times down the stretch. But the third year starter from Hesperia is ready to return to California. The Crimson Tide will play its first two games in San Diego.

“It’s gonna feel good going back to the West Coast,” Shackelford said. “I miss it. It’s been a while, so it’ll be good to play in front of some family and friends that I haven’t seen in a while.”

Alabama head coach Nate Oats has been harping all year about his team’s lack of motivation at times. Shackelford said that shouldn’t be an issue anymore.

Last year’s Alabama team entered the field as a 2-seed and made the Sweet 16. Shackelford said that experience will help this time around.

“Having guys come back from last year’s team is obviously a big help,” Shackelford said. “We can help guys that are new to this and haven’t been in March Madness.”

The Crimson Tide’s path starts with the 11-seed Notre Dame Fighting Irish, who beat fellow 11-seed Rutgers in the First Four. The Irish played an instant classic, going punch for punch with the Scarlet Knights, winning in double overtime.

“They’re a really good team,” Oats said. “For them to beat Rutgers in a game like that showed you how tough they are.”

Shackelford said going into this matchup with Notre Dame, his team has nothing else to prove, other than to themselves.

“I don’t think we have too much to prove,” Shackelford said. “I think it comes with how your season went. And we’re going out there with a fresh mindset to go play our hardest. I don’t feel we necessarily have anything to prove, but we’ve got to go out there and prove to ourselves that we can go out, play for 40 minutes, play hard and give our best effort.”

Tipoff from Viejas Arena in San Diego is Friday, March 18 at 3:15 p.m. CT approximately. If Alabama wins, they will play either 3-seeded Texas Tech or 14-seeded Montana State on Sunday.

“Everyone knows what we have done this year,” Ellis said. “But all that’s in the past and we’ve got to come out and prove it again in the March Madness tournament.”