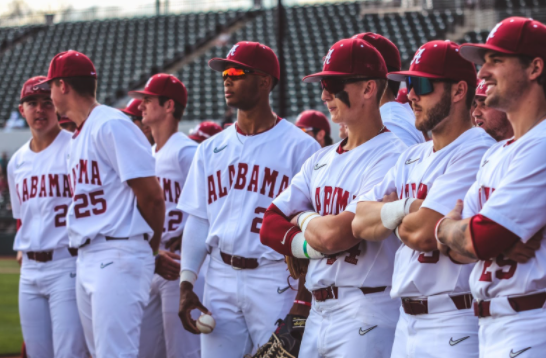 After sweeping the Binghamton Bearcats over the weekend, the Alabama Crimson Tide dropped to the Southern Miss Golden Eagles 3-2 on Wednesday night.

It’s the third midweek loss of the season for the Crimson Tide, who begin SEC play with No. 9 Florida this weekend.

The Golden Eagles controlled most of the game, but Alabama had an opportunity in the eighth inning. With two runners on and two outs, first baseman Drew Williamson was called out on a check swing to end the inning. It looked like Williamson held up. Alabama head coach Brad Bohannon threw a fit in front of home plate umpire Eddie Loggins.

The Crimson Tide finished with nine hits to the Golden Eagles’ eight. Alabama finished 0-for-4 with runners in scoring position.

Alabama struck first, with third baseman Zane Denton hitting his fourth home run in the last five games to put the Crimson Tide up 1-0 in the first inning. Denton went 2-for-3 on the night.

Southern Miss responded in the bottom of the second, when third baseman Danny Lynch sent a bomb over the wall. The Golden Eagles added two more in the fourth, on a two-run double into the gap by second baseman Will McGillis.

Before the controversial call on Williamson, Crimson Tide right fielder Tommy Seidl drove in a run on a fielder’s choice to make the score 3-2.

Saving its main throwing arms for the weekend set with the Gators, it was a pitching by committee day for Alabama. Right-hander Ben Hess got the start, and five other pitchers also saw time on the mound.

“Tonight was a great college baseball game in an awesome atmosphere at Southern Miss,” Bohannon said. “Both teams pitched at a really high level, especially out of the bullpen. Credit to Southern Miss for getting the big hit that we didn’t get.”

The Crimson Tide has little time to dwell on the loss, with No. 9 Florida coming to Tuscaloosa this weekend. First pitch will be 6 p.m. CT on Friday and Saturday, and 1 p.m. CT on Sunday. All games will be on SEC Network+.