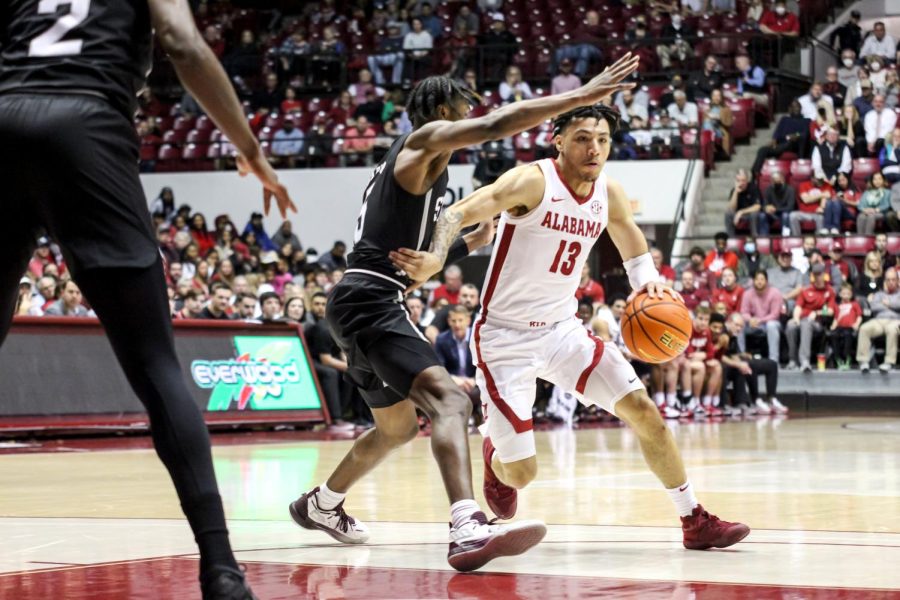 Jahvon Quinerly drives to the basket on Feb. 16 against Mississippi State.

After a remarkable run in Nashville last March, the Alabama Crimson Tide defeated the LSU Tigers 80-79 to win their first SEC tournament championship since 1991.

“Last year’s team was always so poised,” Quinerly said. “That’s something we’re trying to improve on this year. Guys are going to go on runs, we’ve just got to be ready to punch back.”

The Crimson Tide also won the SEC in the regular season, entering the annual tournament as the No. 1 seed. That will be different this year.

It has been a drastic up-and-down season. Alabama defeated No. 1 Gonzaga, No. 3 Baylor, No. 9 Tennessee, No. 15 Arkansas and No. 18 Houston. The Crimson Tide also lost to Georgia, Missouri and Texas A&M.

“We’re just trying to put everything in the past behind us and just focus on tournament play,” Quinerly said. “The upperclassmen have to set a good example for the younger guys.”

Quinerly said that playing in the SEC and NCAA tournaments is drastically different from the regular season.

“I think it just comes with experience,” Quinerly said. “That’s not really something that you can work on. You’ve just got to be able to read the moment. It’s March now. Guys have to be 100% locked in. That’s something that’s just a mindset.”

It will be a tough road for Alabama, which enters the tournament as the No. 6 seed following its losses to LSU and Texas A&M to end the season. That means that if the Crimson Tide defeat Vanderbilt or Georgia on Thursday, they will run into the tournament favorite Kentucky in the quarterfinals. The Wildcats have defeated Alabama twice this season, but the Crimson Tide didn’t play their best in either game. That, and there is plenty of research about the trouble of beating a team three times in one season.

“We’ve got a great opportunity in front of us,” Alabama head coach Nate Oats said. “We’ve got to win four games in four days to defend our SEC championship. It’s about who’s playing the best basketball right now. We’ve played well against the teams that we’re matched up to play.”

If the Crimson Tide are going to make a run, they must begin taking care of the ball. Alabama has turned the ball over 75 times in the last four games, including 21 times at LSU last Saturday.

“Last game LSU had 16 steals, so that’s 16 live ball turnovers,” Oats said. “Charges and dead ball ones are a lot easier to defend. Our offense isn’t giving our defense a chance.”

March is famous for unlikely teams going on runs, and Oats is taking inspiration from past teams. He mentioned the Kentucky women’s team, which just won the SEC tournament as the No. 7 seed, including a win over one-loss South Carolina.

Alabama fans, close your eyes. Oats said the team has also looked at the Auburn Tigers from 2019.

“We’ve talked a little bit about the Auburn team before we got here that won the SEC tournament and went to the Final Four,” Oats said. “There’s plenty of teams that have gone on runs.”

Oats said that since the loss to LSU, his team has practiced very well and that they can do very well as long as they take it one step at a time.

“I think the biggest thing is can you get your guys to forget about the past and really just worry about today,” Oats said. “When you have great practices, it’s a lot easier to get your confidence. They practiced hard. You’ve got to have a good first game.”

The Crimson Tide will begin their journey underneath the palm trees on Thursday night at 7 p.m. CT on the SEC Network. Alabama will face the winner of 11-seed Vanderbilt and 14-seed Georgia. The tournament will take place all weekend at Amalie Arena in Tampa, Florida, with the championship game at noon CT on Sunday.