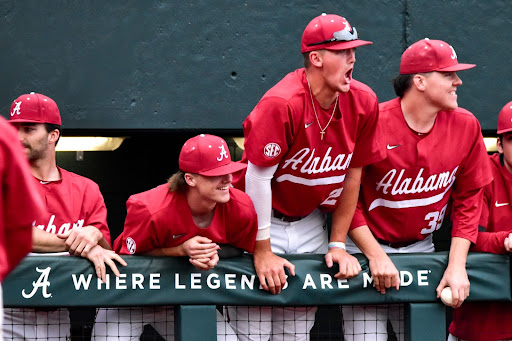 After losing four straight games to No. 1 Texas and UT Martin, the Crimson Tide (9-4) have won four consecutive games, including a 5-4 win over the Murray State Racers (8-3) to complete the three-game weekend sweep.

“Really glad to get a sweep today,” Alabama head coach Brad Bohannon said. “They’re [Murray State] going to do really well in their league. … It’s good to have some adversity. It’s hard to win four in a row.”

The Sunday fatigue caught up with Alabama early, with the Crimson Tide looking sluggish for the first few innings. Alabama had three errors in the first 3.2 innings.

“I didn’t call them together,” Bohannon said. “I was kind of watching to see how they responded. You’re going to have innings like that. It’s a nine-inning game. I don’t want them to think there’s any panic. You’re not going to play perfect every time out.”

Left-hander Grayson Hitt got the start for the Crimson Tide, but it didn’t go according to plan. Hitt threw just three innings, allowing four hits and committing a fielding error, but he struck out four batters. Three Murray State runs crossed under his watch, but he was only responsible for one.

Alabama’s offense came out hot. Jarvis ripped an opposite field double to start the early afternoon. Third baseman Zane Denton drove him in on a sacrifice fly two at-bats later.

After first baseman Drew Williamson stole second, Tamez sent a ball down the left field line to score the second run of the first inning.

Murray State infielder Jordan Holly singled and later reached third off a wild pitch and a stolen base in the third inning. Designated hitter Carson Garner came up and singled, scoring Holly from third.

On a double-play ball to short, Jarvis bobbled the ball and threw it into the outfield to put runners on first and third. Garner stole home while Hitt wasn’t looking to tie the game.

After a Hitt balk, third baseman Bryson Bloomer was on third base. Right fielder Seth Gardner knocked him in to give the Racers the lead.

In the fourth, second baseman Caden Rose hit a sacrifice fly into center field that brought Pinckney home from third to make the score 3-3.

Winning pitcher Brock Guffey was great on the mound for Alabama, going three innings without allowing a hit.

The Crimson Tide won the game off the bat of designated hitter Foggo in the sixth. With Pinckney on first, Foggo sent a blast to left to put Alabama on top 5-3.

The Racers threatened in the ninth, but could only come away with one run. After Landon Green was pulled from his save, right-hander Hunter Hoopes came in and shut the door.

“In the bullpen, I wasn’t really expecting to throw back-to-back days,” Hoopes said. “But Coach and I talked about it before. Being able to go from 3-0 to a strikeout like that was huge, and the emotions got the best of me. But I think that fired up the team, and we were able to get out of it.”

Alabama will continue its long homestand next week with midweek matchups against Middle Tennessee State and North Alabama before hosting another weekend series against Binghamton.

First pitch between the Crimson Tide and the Blue Raiders of Middle Tennessee State is Tuesday, March 8, at 3 p.m. CT. The game will be broadcast on SEC Network+.