No. 25 Alabama makes too many mistakes in overtime loss to LSU 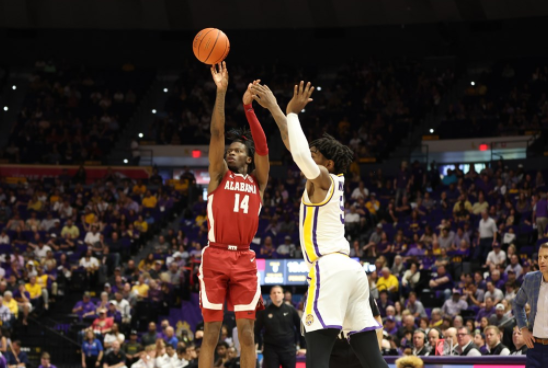 On a baseline throw-in with under 10 seconds to play and trailing by 1, the Crimson Tide had four seconds on the shot clock. Alabama guard JD Davison didn’t realize the clock was running low and didn’t get a shot up, forcing the violation.

It seems like it would be a good idea for a coaching staff to remind their players, but Alabama head coach Nate Oats said that Davison was unaware that the shot clock was so low.

“JD [Davison] said he didn’t know,” Oats said. “As a head coach, I need to make sure everyone knows there’s four seconds on the clock. I thought everyone was aware.”

The Crimson Tide led 77-74 with just over a minute left in overtime, but the Tigers finished on a 6-0 run.

Guard Keon Ellis led Alabama in scoring with 19 points, knocking down three 3-pointers and all eight of his free-throw attempts. Ellis said the team had already moved on from the loss, focusing on the SEC tournament next week.

“LSU is a good team,” Ellis said. “We played hard. It’s not like we were outplayed from the jump. Every game from now on is win or go home. It’s already past us.”

Davison and guard Jahvon Quinerly also reached double figures, scoring 12 and 16, respectively. Quinerly led the team with four 3-pointers made. The Crimson Tide made a total of 11 3-pointers.

Turnovers have been an enormous problem for the Crimson Tide all season, and Saturday was no different. Alabama gave the ball away 21 times, leading to 23 LSU points.

“The effort was much better,” Oats said. “The turnovers are a real issue. If we take care of the ball, we probably win in regulation.”

The Crimson Tide showed extreme effort for the entire game, outrebounding the Tigers 42-33 and grabbing 17 offensive rebounds. Alabama also held LSU to just 28 makes on its 61 shot attempts. The Crimson Tide also went 20-for-22 from the charity stripe.

“Every little detail matters in this game,” Oats said. “There was a lot of stuff we did well. I thought our defense remarkably improved. We have to regroup and figure out who we are going to play. I have no idea who we’re going to play. Once that gets determined, we have to get ourselves ready to play in the SEC tournament.”

With the regular season over, all eyes are now on the SEC tournament, which begins on Wednesday, March 9, in Tampa, Florida. The weekend event at Amalie Arena will begin Thursday for Alabama, which will be the sixth seed in the tournament.