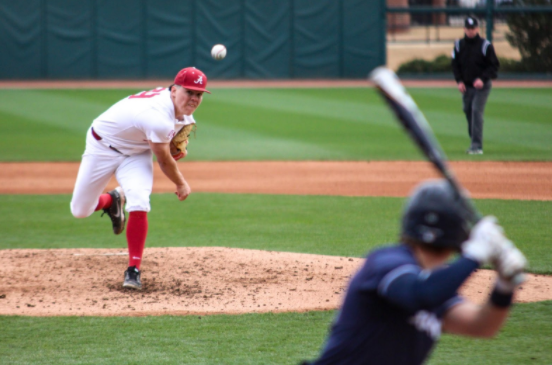 Last week in Austin, Texas, right-hander Garrett McMillan put on a pitching clinic, throwing six scoreless innings against the No. 1 Longhorns. On Friday night, it was more of the same in Alabama’s 5-1 win over the Murray State Racers (8-1).

“I thought we really attacked well today with the fastball,” McMillan said. “That was the game plan going in, to get ahead and stay ahead to try and get quick outs. This is a dream come true for me. I love this. I’m an Alabama fan and have been since I was born, so this is awesome for me to get to help the team win.”

The Racers came into the series averaging almost 12 runs per game, but the Crimson Tide pitching staff quickly stifled them. Alabama (7-4) served up Murray State its first loss of the season after the Racers had won their first eight.

On the offensive side of things, the Crimson Tide had their way. Murray State starting pitcher Hayden Wynja allowed eight hits and four runs in five innings pitched. The Crimson Tide had double-digit hits for the sixth time this season.

It was quite the day for the Alabama outfielders. Center fielder Andrew Pinckney continued his dominance at the plate, going 3-for-4, including a triple off of the wall. Right fielder Tommy Seidl had three knocks, and left fielder Owen Diodati added two hits. Seidl hit his first home run as a member of the Crimson Tide.

“I feel really comfortable,” Pinckney said. “It really helps when Coach Bo trusts me and puts me back in the lineup every day. Knowing that, I can just go out there and compete and make an impact to help the team win.”

Alabama was much better with runners in scoring position, hitting 3-for-6 in those positions.

It began in the bottom of the second, with the Crimson Tide piling on three singles in a row, including one from Diodati that brought in the first run of the game. Pinckney scored later in the inning on a wild pitch from Wynja.

In the fourth, Pinckney singled again, and second baseman Caden Rose knocked him in on a single through the right side.

Right-hander Dylan Ray relieved McMillan and pitched for three innings. Ray allowed only one hit, a solo home run off the bat of designated hitter Carson Garner in the eighth.

“Really glad to get a win today,” Alabama head coach Brad Bohannon said. “There’s not much to say except to talk about the pitching. Garrett McMillan and Dylan Ray were just outstanding, when you punch out 14 and don’t walk any. Really proud of them and happy for them. If we can continue to pitch like that, we’re going to have a chance in every game we play and have a really good season.”

The Crimson Tide and Racers will play two more times this weekend, with Alabama looking to clinch the series on Saturday, March 5. First pitch from Sewell-Thomas Stadium is 2 p.m. CT on SEC Network+.