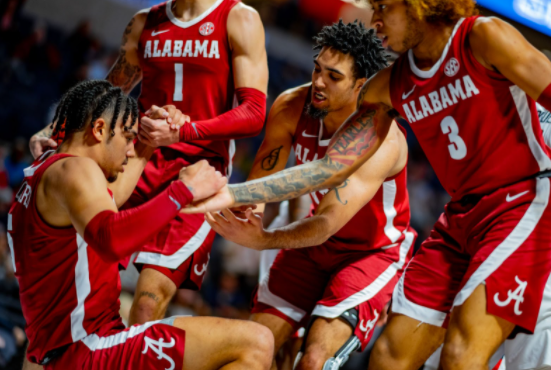 On Wednesday night, the No. 25 Alabama Crimson Tide (19-11, 9-8) got embarrassed on their own home floor in the season’s last game at Coleman Coliseum. The Crimson Tide were outscored 50-31 in the second half, dropping to the Texas A&M Aggies 87-71.

After the game, morale was low. Alabama head coach Nate Oats says nobody in the locker room even wanted to take charge of the team.

“They didn’t say anything tonight,” Oats said. “Nobody wanted to say anything. They’re embarrassed. I’m embarrassed. The end is going to come quick if this is the effort. We’re as good as our effort. It’d be nice if they would play hard for each other. We got to figure out what it’s going to take to get them to play hard every night. We’re at the point of the season where you can’t afford these losses anymore.”

Alabama forward James Rojas is trying to be a voice for a team that needs strong leadership at this time of the season.

“I’m just trying to get my voice out there,” Rojas said. “I play hard all of the time and I know guys are going to listen to me. So just getting my voice out there and holding guys accountable. It’s big for me to get us all going and being the leader I know I can be.”

Alabama forward Charles Bediako said the loss hasn’t ruined the team’s season or momentum; there are just things that need to be cleaned up.

“Don’t take any game for granted,” Bediako said. “We just got to be better on defense, continue to play together, and also attacking and fighting through adversity. And just play hard. That’s really all it is.”

The Crimson Tide will finish the season in Baton Rouge against the LSU Tigers (20-10, 8-9), who they defeated 70-67 in January at Coleman Coliseum. The Tigers are coming off of a midweek loss at No. 14 Arkansas.

In January, the Tigers were without third leading scorer Xavier Pinson. And many other things have changed for the two teams since that meeting almost two months ago.

“A lot changes,” Rojas said. “It’s been a while since we played them. I mean guys get better throughout the year. It’s going to be a whole different matchup from the last game, so we’re just going to come out and play. We just got to play hard.”

With the loss to Texas A&M on Wednesday, Alabama is now in a position where it could finish anywhere from fifth in the SEC to 10th. A win in Baton Rouge would secure the Crimson Tide the No. 5 seed in Tampa next week.

“We put ourselves in a spot with six teams within a game,” Oats said. “There’s a lot of seeding yet to be determined for this tournament. So it’s a big game.”

Oats says that he still has some concerns about his team playing hard against lesser opponents come NCAA tournament time, with his team set to be a five or six seed in the bracket.

“We’re going to do our best jobs as coaches to make sure that no matter who we get matched up with in the NCAA Tournament, it’s taken as seriously as Gonzaga, Baylor, Houston and Tennessee,” Oats said. “The best way that happens is the internal leadership of the team. That’s where we need to get this thing to.”

Saturday’s game will be a tough task, going on the road to face the No. 5 team in defensive efficiency according to KenPom. If the Crimson Tide turn the ball over 19 times again, there will be a small chance of victory. Tipoff between Alabama and LSU at the Pete Maravich Assembly Center is set for 11 a.m. CT on CBS.