Alabama’s inability to pick up timely hits seals fate in series sweep at No. 1 Texas 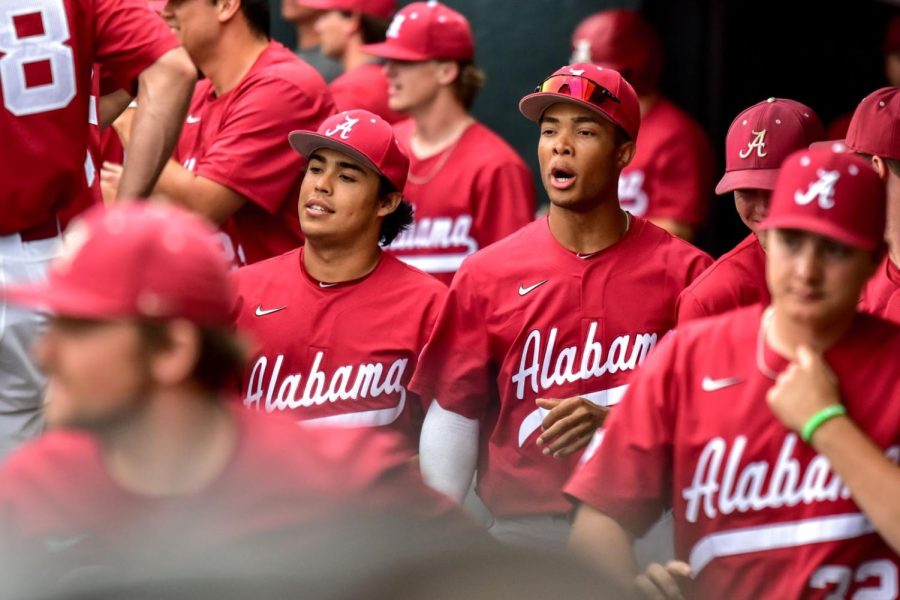 After losing the first two games of the series because of poor offense, it was more of the same on Sunday afternoon.

Alabama lost 6-1 to the No. 1 Texas Longhorns. Sunday’s game completed the Longhorns’ weekend sweep of the Crimson Tide.

“Texas kind of took it to us today, had us on our heels early,” Alabama head coach Brad Bohannon said. “I really thought the first two games were 50-50 games, so I wasn’t pleased with the way we played today.”

Coming into the weekend, the Alabama Crimson Tide knew that in order to win even one game on the road against the top team in the country, they would have to pitch very well.

Texas (8-0) came into the weekend averaging over 11 runs per game. But the problem didn’t lie on the mound for Alabama. It came from the bats.

Time and time again, the Crimson Tide could not buy a hit when they needed one, and eventually the Longhorns’ offense was going to take advantage. Texas did Sunday afternoon.

Alabama went 0-for-8 with runners in scoring position on Sunday. The Crimson Tide finished 0-for-18 total on the weekend.

Alabama wasn’t terrible, accumulating 19 hits in the three games, but it produced just one run.

An offense as explosive as the Longhorns’ was going to break out at some point, and in the back half of game three of the series, it did.

In the fourth inning, Texas loaded the bases, and right fielder Austin Todd grounded out to shortstop to bring in the first run. Bohannon wasted no time bringing out starting pitcher Grayson Hitt immediately after. Right-hander Landon Green came in and got the Crimson Tide out of the jam.

The two big outs gave the Crimson Tide momentum, and they responded quickly. Alabama designated hitter Owen Diodati hit a solo home run in the fifth, bringing the score back to 1-1 in the top of the fifth.

But the Longhorns came back for more in the sixth, with shortstop Trey Faltine and left fielder Dylan Campbell hitting back-to-back singles into left field to bring in three runs and push the score back out to 4-1.

With the Crimson Tide offense cold again, Texas added more in the eighth. Alabama reliever Hunter Hoopes allowed Campbell to score on a balk, and in the same at-bat, designated hitter Murphy Stehly tripled to right-center field, bringing in Douglas Hodo III from second to grab a five-run advantage in the bottom of the eighth.

Longhorns right-hander Aaron Nixon finished off the Crimson Tide in the ninth to stay unbeaten this season.

Even after suffering the sweep, Bohannon was happy that his team was able to gain experience against a team like Texas.

“This was an awesome experience for our kids,” Bohannon said. “We needed this experience of going on the road and playing the No. 1 team in the country in a good environment. We’ll grow from this. There were a lot of positives that we learned about our club and a lot of things that we need to improve upon.”

Alabama will look to bounce back with a big homestand coming up. The Crimson Tide will play their next 10 games at Sewell-Thomas Stadium. The first will be a matchup with the UT-Martin Skyhawks on Tuesday, March 1, at 3 p.m. CT. The game will be broadcast on SEC Network+.