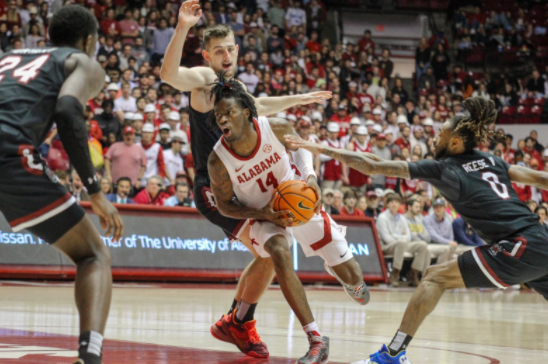 Alabama guard Keon Ellis (14) drives into the paint in the Crimson Tide’s 90-71 win over the Gamecocks at Coleman Coliseum on Feb. 26.

It has been a while since the Alabama Crimson Tide has shown a dominant performance.

On Senior Night at Coleman Coliseum, the Crimson Tide had a 90-71 blowout win over the South Carolina Gamecocks.

The No. 24 Crimson Tide (19-10, 9-7) has now won five of their last six games. The win more than likely locked up the No. 5 seed in the SEC Tournament for Alabama, who was tied with the Gamecocks heading into Saturday.

Five players scored in double figures for the Crimson Tide.

Guard Jaden Shackelford led the way with 21 points, including 10 in the second half. Guard Jahvon Quinerly finished with 20 points and set the tempo for the game, scoring 18 in the first half. Guard Keon Ellis finished with 17 points, 7 rebounds and 4 assists.

Shackelford, Quinerly and Ellis each knocked down four 3-pointers, and Quinerly was a plus 28 in his 29 minutes of action.

Shackelford was proud of his backcourt teammate, who has been on fire lately.

“He’s [Quinerly’s] a hard worker,” Shackelford said. “We know how good of a shooter he is. He has been these past two games. It’s good for him to be playing at this level going into March.”

Alabama head coach Nate Oats said Quinerly is getting back in the game mentally.

“Everyone has been questioning if he [Quinerly] was a shooter or not,” Oats said. “We know he’s got it. I just think he needed to relax. I think he’s getting back to where his mind is right.”

Ellis, who scored 0 points against Mississippi State on Feb. 16, has bounced back the last three games, scoring 55 points over the stretch.

“I’m just sticking to it. It comes and goes,” Ellis said. “You’re not going to have your night every night. Work harder. After practice, just get up more shots.”

As a team, Alabama played to its style, knocking down 13 3-pointers. South Carolina came into the game as one of the best rebounding teams in the country, but Alabama out-rebounded the Gamecocks 38-30 and grabbed 13 offensive rebounds.

On the defensive end, the Crimson Tide forced 19 turnovers and scored 24 points off of them.

Alabama got to the free-throw line effectively and took advantage, knocking down 19 of its 23 shots from the stripe.

The Crimson Tide played possibly its best half of basketball this season in the first frame. Alabama led the Gamecocks 50-27 at the intermission. Walk-ons Britton Johnson and Tyler Barnes, as well as forward James Rojas, got the appreciation start from Oats. At one point late in the first half, Shackelford and Quinerly were outsourcing the Gamecocks by themselves.

Shackelford wanted the Crimson Tide to get a win for the seniors on the squad.

“They’ve meant a lot to us,” Shackelford said. “It’s hard to put into words. They all contribute in a unique way to this program. It was good to get a win on their Senior Day.”

Oats said today’s effort was for the seniors.

“Great win for senior night,” Oats said. “It’s arguably the best two-year span we’ve had here in 30 years. They’ve taken this program to new heights. I couldn’t be more happy for them.”

In the second half, things got hairy. South Carolina started the second half on a 25-8 run to cut the Crimson Tide lead to six with over 12 minutes to play.

“Before the second half started, we knew they were going to have their run,” Ellis said.

“We’ve gotta mature a little bit with a 23-point lead,” Oats said. “That’s the area we’ve got to grow, but I think we showed some maturity getting stops.”

After the under-12 media timeout, Alabama regained its confidence and took it to the Gamecocks going on a 32-13 run to go back up 25 with 2:24 remaining.

Saturday was the penultimate home game of the season for the Crimson Tide. Alabama will stay at home to take on the Texas A&M Aggies on Wednesday, March 2, at 6 p.m. CT. The game will be broadcast on the SEC Network. The Crimson Tide will finish the regular season next Saturday at LSU.