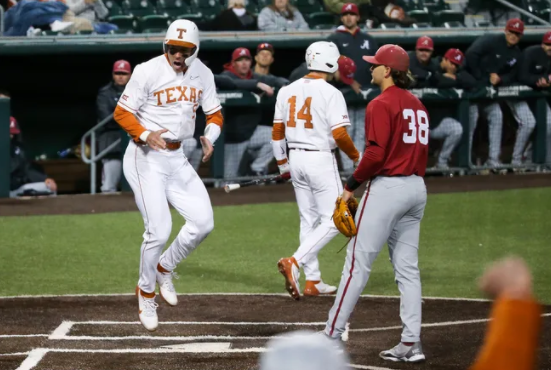 The Alabama Crimson Tide had the bases loaded two different times but couldn’t come away with any runs in their 1-0 loss Friday night to the No. 1 Texas Longhorns at UFCU Disch-Falk Field in Austin, Texas.

It was a game that the Crimson Tide felt like they could have won, with the team having many chances to win throughout the nine innings.

On a full count in the fifth inning, third baseman Zane Denton flew out to right field to end the scoring chance. And in the eighth, freshman Will Hodo struck out looking with an Alabama player on each base.

To tie the game in the ninth, Alabama had first baseman Drew Williamson on third base with one out. But catcher Dom Tamez struck out and Denton popped out foul to end the game.

Overall, the Crimson Tide finished 0-for-9 with runners in scoring position.

Alabama had seven hits to the Longhorns’ five. Williamson and left fielder Tommy Seidl both finished with two hits. Both of Williamson’s knocks were doubles.

The lone run crossed the plate in the bottom of the seventh inning, when Ray threw a wild pitch that saw Texas third baseman Skyler Messinger score from third base.

“I was really pleased with the way our kids competed tonight against the No. 1 team in the country,” Alabama head coach Brad Bohannon said. “Garrett McMillan gave us a great start. It was very difficult for both teams to hit in these weather conditions. We had our chances, but their pitchers made some great pitches in key moments.”

The Crimson Tide will have two more chances to secure a win over the top team in the country. Saturday’s game will begin at 1:30 p.m. CT on the Longhorn Network.