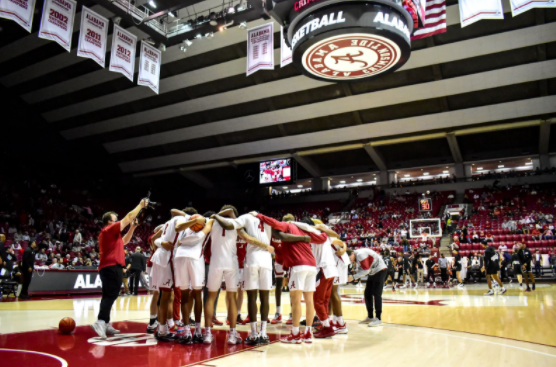 Alabama takes part in a huddle prior to taking on the Mississippi State Bulldogs at Coleman Coliseum on Feb. 16, 2022.

Guards Jahvon Quinerly and Keon Ellis, as well as forward James Rojas will be honored in front of the home crowd. Walk-ons Britton Johnson and Tyler Barnes will also be commended for their efforts to the team the last few years.

Quinerly has expressed his interest in the NBA, but hasn’t fully committed to it.

“It’s not 100% set in stone,” Quinerly said. “That’s a decision that will be made at the end of the year. My focus right now is to finish strong as a group.”

But if this is it for the 23-year-old from Hackensack, New Jersey, he is happy with the decision. Quinerly came to Tuscaloosa from Villanova, and he has had a long journey. Quinerly was not granted an immediate transfer and had to sit on the sidelines for the full season in 2019-20. Last season, Quinerly was named the MVP of the SEC Tournament.

“I’d rate it a 10,” Quinerly said of his time at the Capstone. “Just finding the right program that values me. It’s been a great run. I’m excited to see how far we can go this year.”

For Ellis, he’s always wanted to play for Alabama since he was a kid. His first two seasons were played at Florida SouthWestern State College. Since arriving in Tuscaloosa, he has become one of the best two-way players in the SEC and in all of college basketball.

“I grew up an Alabama fan, so I wanted to come here for that,” Ellis said. “Just playing here is an honor.”

Alabama head coach Nate Oats has brought in plenty of junior college players as a coach, and there’s a method to his madness.

“I think junior college kids have a different perspective,” Oats said. “They seem like they just appreciate the opportunity and have a chip on their shoulder. Guys go to junior college for different reasons. We try to make sure we don’t take kids with a lot of red flags. Our job as coaches is to help these guys achieve their dreams. And I think they’re all in a pretty good spot right now.”

Aside from the ceremony, the Crimson Tide has a very important game to play. The Gamecocks have won four straight and are tied with Alabama for fifth place in the SEC. Oats is expecting a dogfight.

“Us and South Carolina are both tied for fifth place,” Oats said. “They’re tough, hard nosed, and really athletic. Just like all of Frank’s teams, they play really hard. They play super hard on the defensive end. They’re physical. Our guys are gonna have to be tough and take care of the ball. They’re gonna get to the offensive balls. Anything ‘tough’ in the game of basketball, a Frank Martin team is gonna be good at.”

Quinerly, who scored 17 in the second half to take down Vanderbilt, lives for this time of year. He thinks that this matchup with South Carolina is another step towards the teams’ goals.

“We love this time of the year,” Quinerly said. “We played for a really good team last year so we know what it’s about. You want to go out the right way, not the wrong way with it being your last year. It’s an exciting time of the year.”

Oats is focused on the same thing, saying that winning, specifically winning in March, is the most important thing to improve your draft stock.

“The one thing I do tell them is that the more this team wins, the better their draft stock is,” Oats said. “If we didn’t win like we did last year, Primo doesn’t go 11th.”

Fifth place in the SEC will most likely be decided Saturday evening at Coleman Coliseum. Tipoff is 5 p.m. CT on the SEC Network.