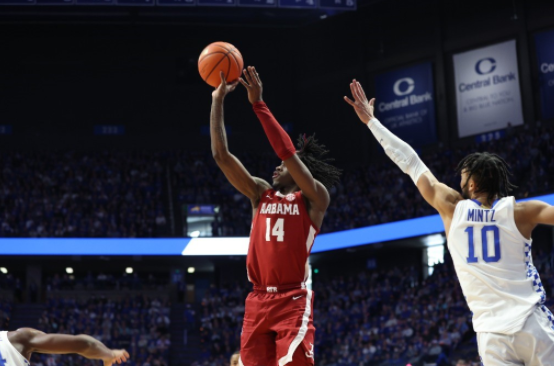 A basketball game can change in minutes, sometimes seconds.

“He [Ellis] was great,” Alabama head coach Nate Oats said. “He came out aggressive. I showed him a highlight video of himself and said ‘Let’s get back to this, Keon.’ He was playing with confidence. It was great.”

After shooting a season-low 3-for-30 in the first matchup with the Wildcats, the Crimson Tide could not miss out of the gate, knocking down nine of their first 12 3-point attempts.

Shot after shot went in for the Crimson Tide, who looked like they might run the Wildcats out of their own arena. But the defense wasn’t strong enough to hold the lead.

“We wasted a good shooting night,” Alabama head coach Nate Oats said. “We kept telling them that our defense wasn’t going to be good enough to win the game. And that’s what ended up happening. We should’ve been up 20.”

Kentucky was without both of its starting guards TyTy Washington Jr. and Sahvir Wheeler, but it did not matter offensively. Guard Kellan Grady dropped 25 points in their place and was a flamethrower from deep. Grady knocked down seven of his nine long-range attempts.

Forward Oscar Tshiebwe had another Naismith Player of the Year-esque performance with 21 points and 14 rebounds. Forward Keion Brooks Jr. had another impressive performance against the Crimson Tide, adding 14 on an efficient 7-for-12 shooting.

Alabama started the game on fire, leading 17-8 before the Wildcats could blink. The fans in blue at Rupp Arena believed the Crimson Tide would eventually miss, but they didn’t. The net kept swishing, and Alabama led 41-28 with 5:35 left in the half.

After a furious comeback, the Wildcats finished the first half on a 19-5 run, and Kentucky somehow took a lead into the locker room.

The Crimson Tide didn’t back down to start the second half. After a Shackelford 3, Alabama led 56-54 with over 16 minutes to play.

But they started missing shots, and the Wildcats took advantage. Kentucky’s 20-2 run over the next five minutes gave the Wildcats complete control. The closest the Crimson Tide could ever get back was 7.

In the full 40 minutes, the Wildcats picked up just seven personal fouls.

“I thought there were some drives that could have been called,” Oats said. “Maybe there could have been a few more, but to me, that’s more indicative of our guys not being aggressive enough.”

Alabama’s next three games are very winnable. The Crimson Tide will take on Vanderbilt, South Carolina and Texas A&M over the next two weeks.

The first will be a road trip to Nashville to take on the Commodores. Tipoff from Memorial Gym is Feb. 22 at 8 p.m. CT on SEC Network.

“We didn’t have a great shooting night,” Oats said. “We had a good shooting night from two guys. The defensive thing is the main issue here. At times, it has been okay. If we don’t guard Vanderbilt, we can’t win there.”