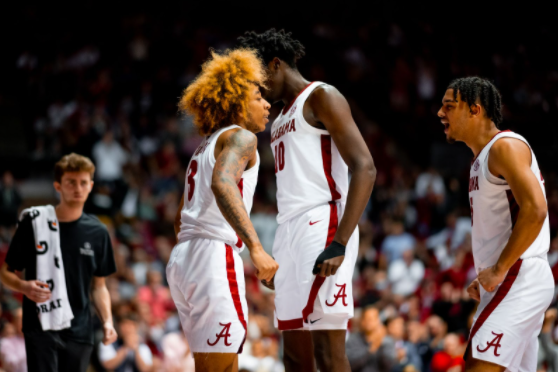 Charles Bediako (10) and Jaden Shackelford (5) celebrate with JD Davison (3) after a bucket in Alabama’s 68-67 win over the Arkansas Razorbacks on Feb. 12.

A month ago, the Alabama Crimson Tide led the Mississippi State Bulldogs 60-55 in Starkville, Mississippi, with under 10 minutes to play. The Crimson Tide had held their own against an aggressive rebounding team and earned an advantage on the glass.

That’s when Alabama fell apart, allowing a 20-7 scoring run due to plenty of second-chance opportunities for the Bulldogs.

“We were up 1 on the glass at the under-eight media timeout, and then after that we got out-rebounded by 12,” Alabama head coach Nate Oats said after the loss. “That’s really what the game came down to. It’s hard to win a game when they’re getting half of their misses.”

Fast forward 30 days later, and the Crimson Tide are chomping at the bit for a second chance with the team just 83 miles away. This time, the game will be in the friendly confines of Coleman Coliseum.

“There was a stretch in the second half where we couldn’t get a defensive rebound, and that’s kind of what changed the game for them and changed the game for us,” Alabama guard Jaden Shackelford said. “We’re coming in with a better mindset. We’ve gotta be tougher when it comes to rebounding the basketball. We’ve just got to come ready. They’re a really good team, so we’ve just got to come ready to fight.”

After being unranked for four weeks, the Crimson Tide sneaked their way back into the AP poll, sitting at No. 25 this week.

Since defeating Alabama a month ago, Mississippi State has lost six of its last eight games and three straight. The Bulldogs are currently No. 45 in KenPom and are just outside of the bubble.

If Mississippi State is going to pick up another win against Alabama, a few of its key players will need to step up again. Guard Iverson Molinar scored 24 points and also had six rebounds and four assists in the Bulldogs victory last month. Fellow guard Shakeel Moore scored 15 and forward Garrison Brooks had 16 points and 10 rebounds.

It will be much more challenging this time around for Mississippi State. The Crimson Tide are 11-2 in Tuscaloosa this season, with their only home losses coming from No. 2 Auburn and No. 4 Kentucky.

One of those 11 victories came against No. 23 Arkansas in a game Alabama was able to win despite turning over the ball a season-high 24 times.

“Excited to play Mississippi State again,” Oats said. “We’ll play big if we need to play big. We’re going to figure out a way to rebound the ball. We can’t turn the ball over 24 times. Our point guards got to take care of the ball. Make simple plays. We don’t need home run plays. When we hit singles, our offense is pretty good. The ball moves, and we’ve got really talented players and we get them open shots.”

The Crimson Tide looks to get back to a winning record in conference play at Coleman Coliseum on Wednesday, Feb. 16, at 6 p.m. CT on ESPN2.