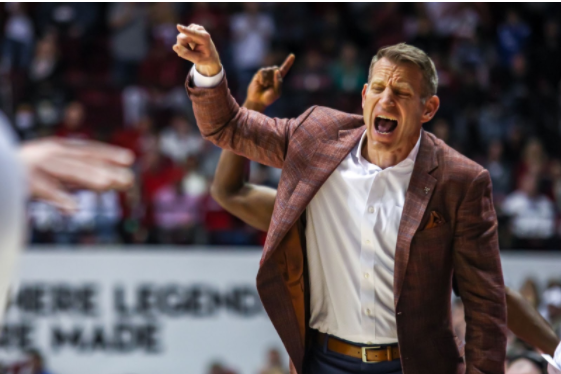 On Wednesday night, the Alabama Crimson Tide won a road game for the second time this season.

The Crimson Tide (15-9, 5-6) put on an offensive clinic in their 97-83 win over Ole Miss, knocking down 14 3-pointers and proved that head coach Nate Oats’ strategy is well worth it when it works.

Guard Jaden Shackelford recorded a career-high 30 points and knocked down eight of the team’s 14 shots from deep.

“We know what we’re capable of,” guard Keon Ellis said. “You can only struggle for so long. It was nothing we were surprised of. We just got to keep shooting with confidence.”

For Oats, the Crimson Tide were due for Wednesday’s performance after a long stretch of poor shooting.

“We had been struggling with some confidence on offense,” Oats said. “People talked about our struggles, but we’re 11th in offensive efficiency. Last season we were 32. The problem has been on the defensive end.”

But Alabama’s next opponent — the Arkansas Razorbacks (19-5, 8-3) — also had a productive midweek game, beating the No. 1 Auburn Tigers and ruining their 19-game winning streak. The Razorbacks are the hottest team in the SEC, reeling off nine straight wins after starting 0-3 in conference play.

With their win over top-ranked Auburn, the Razorbacks have slid up to No. 22 in KenPom.

“It’s a huge game for us,” Oats said. “We’ve got the hottest team in the SEC at home. Coach Eric Musselman has these guys playing the right way. They’re a good team. We got to really take care of home court advantage. Hopefully, the coffee and doughnuts will get them out here.”

Oats is referencing the coffee and doughnuts that the first 200 students will receive for the earliest tipoff of the season at 11 a.m.

The Razorbacks have a similar style to the Crimson Tide. Arkansas is ranked 18th in the country in tempo, and the team wants to run up and down the floor with guard JD Notae. He is averaging 19.1 points per game — the highest in the SEC.

The Razorbacks also have athletic big Jaylin Williams, who is averaging an SEC second-best 9.2 rebounds per game.

Alabama is getting aggressive on defense and fouling. Arkansas is No. 1 in the country in free throws made and attempted and is shooting an average of 23.1 shots per game from the charity stripe.

Oats is concerned with his team’s defense, especially in transition, after its subpar performance against Ole Miss.

“Our defense against Ole Miss wasn’t good once we got a lead,” Oats said. “That’s not good. Arkansas plays in transition a lot more than Ole Miss does, so we have to be better in that regard. We’ve got to be locked in on both sides to beat Arkansas.”

Arkansas will take its nine-game winning streak into Coleman Coliseum for an early 11 a.m. CT tipoff. The game will be broadcast on SEC Network.