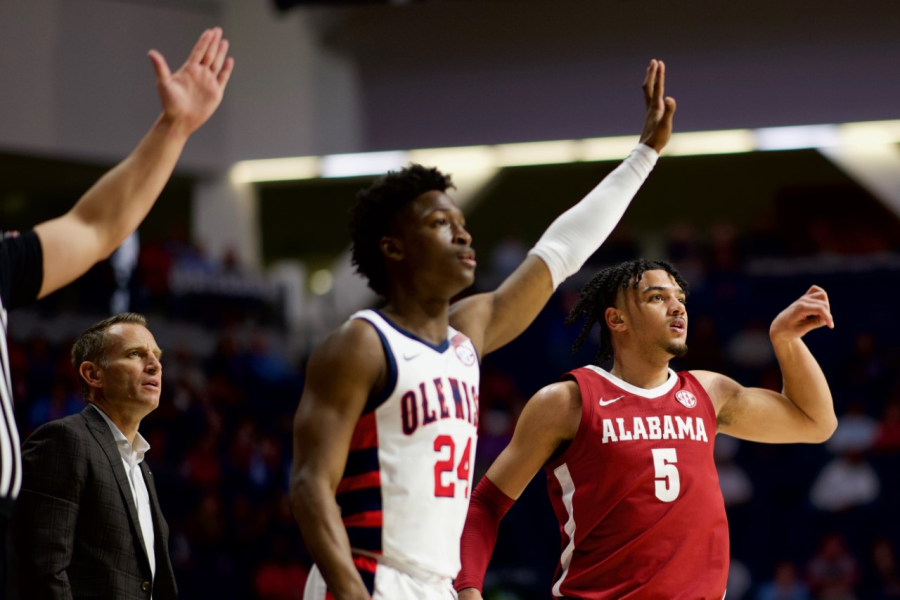 Just four days after the worst offensive performance of the season, the Alabama Crimson Tide (15-9, 5-6) looked like their old selves, knocking down shot after shot in their 97-83 rout of the Ole Miss Rebels.

It looked like another long night for Alabama in the beginning. Ole Miss jumped out to a 30-19 lead in the first 10 minutes of action.

That’s when the shots began to rain down for the team donning the crimson uniforms.

A 30-8 run to finish the half gave complete control to the Crimson Tide, who took a 49-38 lead into the break.

Alabama guard Jaden Shackelford led the way from the start, finishing the game with a career-high 30 points. Shackelford shot over 58% from the field and knocked down eight 3-pointers in what has become normal for the junior from Hesperia, California.

“It felt good to come out and shoot well,” Shackelford said. “I felt a lot better than last game. They found me open, and I’ve got to be ready to shoot.”

“I thought he [Davison] was great at attacking downhill,” Alabama head coach Nate Oats said. “The more rebounds he gets, the more aggressive he is. And [Jahvon] Quinerly had eight assists for us.”

“I feel like I’m getting the hang of it,” Holt said. “I love it here. I love my teammates and coaches. I’m always looking forward to the next play, the next game.”

The Crimson Tide were on fire from deep. Following its 3-for-30 performance against Kentucky, Alabama shot 14-for-22 from behind the line.

“I thought our guys showed some fight and resolve,” Oats said. “I think the law of averages may have helped us out tonight. After shooting 3-for-30 against Kentucky, we were due to knock down some shots. There were stretches where we were decent defensively. Happy to get a road win.”

The Crimson Tide had assists on 23 of their 36 buckets.

The Rebels’ problems were on the defensive end on Wednesday night. On offense, Ole Miss held its own. Jarkel Joiner had a performance to rival Shackelford’s, finishing with 33 points. Guard Matthew Murrell and forward Nysier Brooks contributed as well, adding 15 and 10, respectively. The Rebels knocked down 12 3-point shots of their own.

The Rebels started the second half with energy, going on a 9-0 run in less than two minutes to jolt themselves right back into the game. But it was short-lived. Alabama answered, going on a 16-5 run over the next five minutes to take control for good.

“It was a fun win,” Oats said. “We scored 97. At this point, we keep encouraging them and being positive. I thought they were playing hard for each other. We talked about celebrating your teammates’ success. I thought we did that.”

The Crimson Tide will take the momentum into a two-game homestand, beginning with the Arkansas Razorbacks on Saturday, Feb. 12. The Razorbacks are coming off of a win over No. 1 Auburn on Tuesday. Tipoff from Coleman Coliseum is set for 11 a.m. CT on SEC Network.