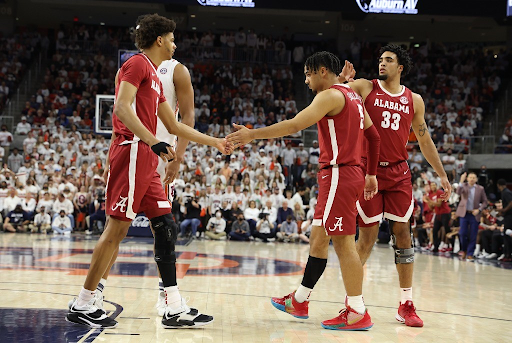 After facing three top-five opponents in the same week — No. 4 Baylor, No. 1 Auburn and No. 5 Kentucky — the Crimson Tide will now face three consecutive unranked teams.

The Crimson Tide (14-9, 4-6) have lost three straight conference games and are coming off their worst shooting performance of the season against Kentucky. Alabama shot 28.1% from the field and made just three of its 30 3-point attempts. The Crimson Tide also set their season low in points and field goal percentage.

“We’ve lost three straight SEC games,” Alabama head coach Nate Oats said. “We’ve got to get back on track towards a higher seed in the SEC Tournament. There’s a lot of questions to be answered. Ole Miss is a good team. They’ve beaten good teams.”

It won’t get easier on the offensive end for the Crimson Tide, who will play on the road against the 57th-ranked defense in the country. Ole Miss ranks third in the SEC in opponents’ 3-point percentage at 29.7%. The Rebels are 10-4 at home this season.

“Every away game is tough for us,” forward Juwan Gary said. “They’re experienced. We just going to go out there and play with max effort and give it all we got.”

Even with the shooting woes, Oats is not too concerned.

“I think guys need to see the ball go in hundreds of times to realize they’re still a good shooter,” Oats said. “NBA players go through long shooting slumps. It’s just that a lot of our guys are in slumps.”

Alabama isn’t currently shooting well, but Oats said they are still the 16th-best offense according to KenPom rankings.

Ole Miss has struggled mightily this season against strong competition, holding a 1-7 record against Quadrant 1 teams. The sole win came against LSU, which was No. 25 at the time.

Like Alabama, the Rebels are led on offense by a trio of guards. Jarkel Joiner, Daeshun Ruffin and Matthew Murrell combine for over 36 points per game. Ruffin is beginning to take the reins on offense, averaging almost 17 points per game over the last four games. Forward Nysier Brooks is a big presence down low, averaging 9.5 points and eight rebounds per game.

Alabama forward Charles Bediako will attempt to slow down Brooks, who pulled off one of his best performances of the season last Saturday. Bediako finished with 12 points and eight rebounds and feels his confidence is improving as the season goes on.

“It was a really big confidence booster,” Bediako said. “My teammates are always helping me get better. I give all the credit to them and the coaching staff.”

Even though his team has lost eight of its last 14 games, Oats is confident that the Crimson Tide are still capable of a deep tournament run despite dropping in the polls week after week.

Forward Darius Miles, who has missed the past two games because of injury and suspension, is expected to play Wednesday night.

The Crimson Tide have won just one of their last eight matchups in Oxford. But Alabama has won six of the last seven meetings overall, including last year in Tuscaloosa.

The Crimson Tide will look to win their fifth straight against the Rebels on Wednesday. Tipoff from the Sandy and John Black Pavilion in Oxford, Mississippi, is set for 7:30 p.m. CT on SEC Network.