Men’s basketball looks to add another statement win against No. 5 Kentucky 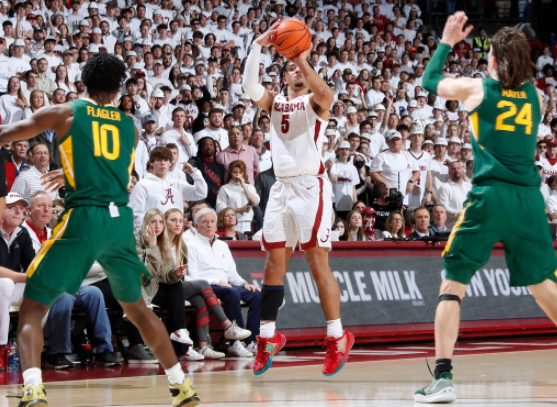 Alabama (14-8, 4-5) is the first program since Rutgers in 2009 to play three straight top-five opponents in the regular season, and it has had mixed results.

The Crimson Tide took down the defending national champions, the Baylor Bears, last week. On that day, Alabama looked as though it could be a contender come March.

But Tuesday rolled around, and the Crimson Tide allowed 100 points to the No. 1 Auburn Tigers. Along with allowing the most points in a game this season, Alabama surrendered 39 free-throw attempts.

That loss can be put aside if Alabama can finish 2-1 during this week’s grueling schedule.

“If you’re going to make a run in March, you’re going to have to beat really good teams,” Alabama head coach Nate Oats said. “In college football, two losses takes you out. In basketball, you can lose some games and learn from them. I think this stretch prepares us more than anyone else.”

The Crimson Tide will host the No. 5 Kentucky Wildcats (18-4, 7-2) at Coleman Coliseum on Feb. 5. This is the second straight week that Alabama is hosting a top-five opponent.

“They’re a really good team,” Alabama guard Jaden Shackelford said. “We all know they rebound the ball really well and have the best rebounder in the country. We’re going to go in there and do our best to limit his rebounds. We just got to lock in and be ready.”

Following a tough season in 2020-21, Kentucky regrouped and added a lot of talent to its roster. For the most part, Kentucky’s production is coming from players who weren’t in Lexington last year. But that is nothing new for head coach John Calipari, who has run a mostly one-and-done program at Kentucky for years.

Leading the charge for the Wildcats is forward Oscar Tshiebwe. The West Virginia transfer is averaging 16.1 points and a national best of 15.2 rebounds per game. Tshiebwe has five games with over 20 rebounds apiece this season. He snatched 28 rebounds against Western Kentucky in December.

“We’re going to have to have our guards come in and help rebound the ball,” Oats said. “We’re not expecting our guys to out-rebound him, but we have to fight.”

Kentucky also has plenty of talent around the perimeter. Guards TyTy Washington Jr. and Sahvir Wheeler are both averaging double-digit points.

Wheeler, who started at Georgia for two seasons before leaving for the Bluegrass State, is averaging over seven assists per game.

Davidson transfer Kellan Grady is a flamethrower from beyond the arc, shooting over 44% from deep. As of late, forward Keion Brooks Jr. is now a factor. Brooks has scored 47 over the past two games, including a 27-point performance in Kentucky’s thrashing of No. 10 Kansas at Allen Fieldhouse a week ago.

“You can’t just say you’re going to shut down Tshiebwe,” Oats said. “That opens up Grady for 3, or Wheeler to score. They’ve got a great starting group, and they’ve got guys on the bench that would start for other teams. We’re gonna have to play really well tomorrow.”

Alabama has been dominant on its home court this season with a 10-1 record. Oddsmakers expect that to continue, with the Crimson Tide opening up as favorites to win yet another game against a top-tier opponent.

“Every game we’ve played at home this year has been unbelievable,” Shackelford said. “The energy our fans bring us gives us an edge. We feed off their energy.”

Tipoff is Saturday at 7 p.m. CT on ESPN.