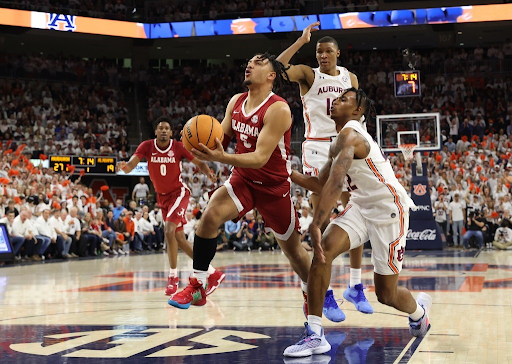 With the win, the Tigers swept the regular-season series with the Crimson Tide. Alabama swept the series last year.

The Tigers shot 39 free throws in 40 minutes of action and converted 31 of them. The Crimson Tide shot 17-for-22 from the charity stripe. Auburn had 52 points in the paint and 27 in transition.

“They’re good everywhere,” Alabama head coach Nate Oats said. “We gave away too many points in transition. Gave up 31 at the line. Got to learn how to guard without fouling. Our effort wasn’t as good as it was against Baylor. We saw it at times, but not for the full 40. They’re better than we are right now.”

Oats says that while he wanted some calls to go both ways, the fouls “did not decide the game.”

Alabama returned to its old ways, knocking down 14 3-pointers. Guards Jaden Shackelford and Jahvon Quinerly scored 26 and 20 respectively, but it wasn’t enough to keep up with Auburn, which seemed to score every time it had the ball.

The Tigers had five in the double digits. Leading the way was guard Wendell Green Jr. with 23 and forward Jabari Smith with 17. Forward Walker Kessler was a serious force in the paint for the Tigers, finishing the game with 14 points, 12 rebounds, eight blocks and four steals.

The rebounding advantage wasn’t immense for Auburn, but the Tigers still grabbed seven more than Alabama did.

Shackelford came out ready to play, scoring 13 of Alabama’s first 26 points. The Crimson Tide started the game up 14-10.

After that was one of many large runs by the Tigers on the night. Auburn went on a 34-12 run over the next 10 minutes to jump out to an 18-point lead with under four to play in the first half. The Tigers took a 51-37 lead into the locker room.

Alabama came out onto the floor in the second half ready to roll and started the second frame on an 18-6 run to cut the Auburn lead to 2 with over 14 minutes to play.

“I thought our guys showed some fight to start the second half,” Oats said. “But we couldn’t sustain it. Just ran out of some gas.”

That momentum didn’t last long. Auburn went on a 24-6 run of its own to stretch the lead back out to 20 with 7:04 to play. From there, the Tigers controlled to win their 18th straight, dating back to November.

The daunting stretch continues for the Crimson Tide with the No. 5 Kentucky Wildcats on Saturday night. If it can win that, Alabama will have won two of its three games against top-five opponents in the same week.

Tipoff from Coleman Coliseum is Saturday, Feb. 5, at 7 p.m. CT on ESPN.