Alabama beats No. 4 Baylor in the Big 12/SEC Challenge 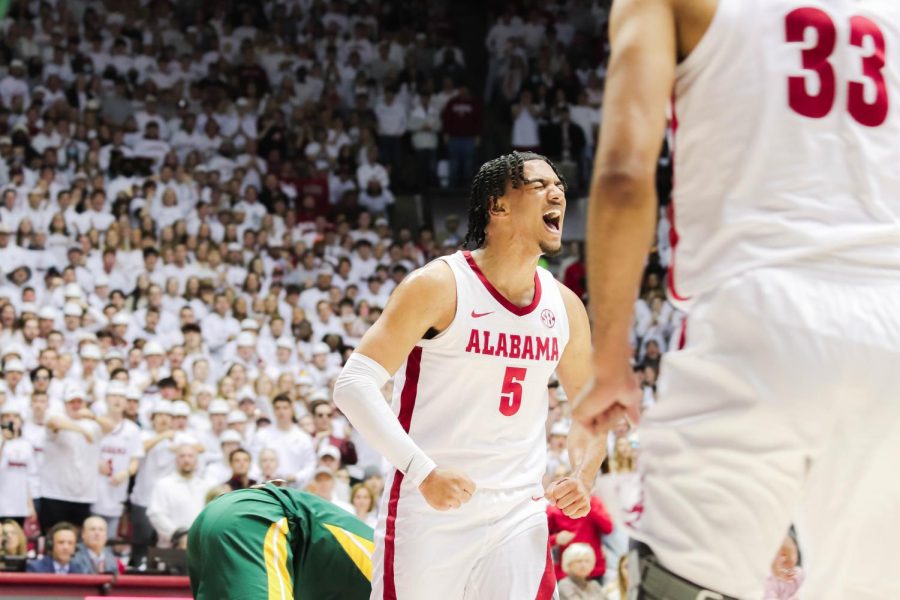 Jaden Shackelford celebrates during the Big 12/SEC Challenge on Jan. 29, 2022.

It was a scramble for most of the game, but the Alabama Crimson Tide (14-7) made the bigger plays down the stretch and fed off of the crowd’s energy to beat the No. 4 Baylor Bears, 87-78, Saturday afternoon.

“They’re the only team in the country that’s top 10 in offensive and defensive efficiency,” Alabama head coach Nate Oats said. “I just thought our guys had some resilience about them that maybe they didn’t in the past. Lots of credit to our guys after we easily could have folded after losing to Georgia.”

Alabama guards Jahvon Quinerly, Jaden Shackelford, JD Davison and Keon Ellis combined for 64 of Alabama’s 87 points. Forward Juwan Gary, who was clad in a black mask and returning from a facial contusion, added 15 on 7-for-8 shooting. Quinerly, Shackelford and Davison each had five assists.

Quinerly, who was in a shooting slump, sank 3-for-6 from beyond the arc. Oats commended his defensive performance, saying that the rest of the team follows his lead.

“I’ve been shooting in the gym a lot,” Quinerly said. “I try not to lose any confidence because I know how good of a shooter I am. It really did feel good.”

It wasn’t horrible, but the Crimson Tide still shot just 7-for-21 from downtown. The team is buying into a new identity while still firing away open looks from deep.

Alabama once again was the aggressor in the paint, out-rebounding the Bears 29-25 and scoring almost half of its points in the painted area. The Crimson Tide finished with a field goal percentage of 59.2% on the afternoon.

“We had a big honest talk as a team after Georgia,” Shackelford said. “We got a lot closer after that. We just locked in and practiced really hard, and I felt like we were ready when the ball went up.”

Both teams had turnover issues, but it ended up sealing the Bears’ fate. Baylor turned the ball over 16 times, leading to 24 points the other way.

Nearly 15,000 fans packed into Coleman Coliseum on Saturday, and it made a difference. The Crimson Tide jumped out to a 15-8 lead eight minutes in. Baylor had short leads twice in the first half, but Alabama took a 38-34 lead into halftime.

“It was unbelievable,” Shackelford said. “We know they’re passionate about our basketball team. We have some really, really great fans.”

The beginning of the second half was much like the first. Alabama went on a 19-8 run to start the second frame to grab a 15-point lead.

The defending champs bounced back, cutting the Alabama lead to six with 5:30 to play after Sochan banked in a three from the elbow. Sochan scored again later, making the Crimson Tide feel the pressure, leading just 75-71 with four minutes to go.

But a quick 6-0 run capped off by a fast break slam by Davison sent the Bears back into their den for the rest of the night.

Game one of the gauntlet three-game stretch is over, but there are still two to go. Next is a rematch with No. 1 Auburn. Tip-off from The Jungle is set for Tuesday, Feb. 1, at 8 p.m. CT on ESPN.

“We really needed to get one here,” Oats said. “To get the first one is great. Now we’re looking ahead to Auburn. It’s gonna be harder to beat them on the road, but we’re capable.”