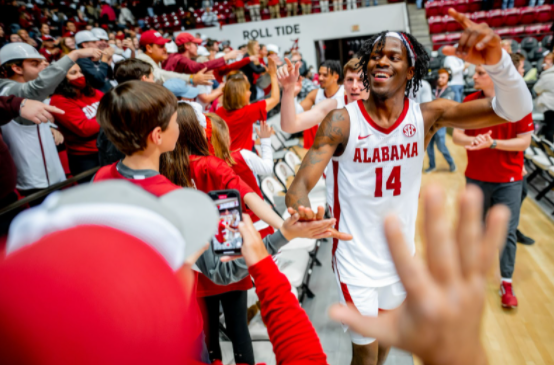 The day is here.

Jan. 29 has been circled on the Alabama basketball calendar for some time now, as Coleman Coliseum will host the 2021 National Champion Baylor Bears (18-2).

The Bears are currently ranked No. 4 in the AP Poll.

It’s the 10th year of the SEC/Big 12 Challenge and the sixth year that the Crimson Tide has been involved. Alabama and Baylor faced off in the event three years ago.

“Baylor’s one of the best teams in the country,” Alabama head coach Nate Oats said. “Defending National Champs, third Final Four team we’ve played. We’ve tended to play a little better than our competition. Hopefully, that’s the case here. We got to bring effort every time. We can pull it out.”

The Crimson Tide had its worst loss of the KenPom era at Georgia on Tuesday, falling 82-76 to the Bulldogs. But with the way this team has been playing against top-tier opponents this season, Alabama has reason to believe it could win on Saturday. The Crimson Tide is also 9-1 on its home court this season, with the sole loss against No. 1 Auburn.

“We’ve got to rid the entire program of the complacency and the arrogance that seemed to have crept in based on maybe what we did last year and the beginning of this year,” Oats said. “I think losing to 0-6 Georgia may have humbled enough people to play with an edge.”

Since being ranked sixth in mid-December, the Crimson Tide has faced issues on both sides of the ball, with its defending and shooting in a slump.

Even after losing to Georgia, Alabama sits as a five-seed in the NCAA Tournament according to ESPN’s Joe Lunardi, who released his latest “bracketology” on Friday.

Before playing the fourth-ranked Bears, Alabama forward Noah Gurley said the team “had an honest talk with each other.”

As big as the game is for the Crimson Tide, Gurley and guard Keon Ellis are treating the game like every other.

“I feel like every game just comes down to basketball,” Ellis said. “I don’t think the whole non-conference thing really has an effect. I think we just got to approach it as still another game that we got to use to get better.”

Fans will see if the Crimson Tide can earn its fifth win over a top-15 opponent when Alabama and No. 4 Baylor meet up for the SEC/Big 12 Challenge. Tip-off from Coleman Coliseum is Saturday, Jan. 29, at 3 p.m. CT on ESPN.