Doggette shines as gymnastics secures first win of 2022 season against No. 9 Kentucky 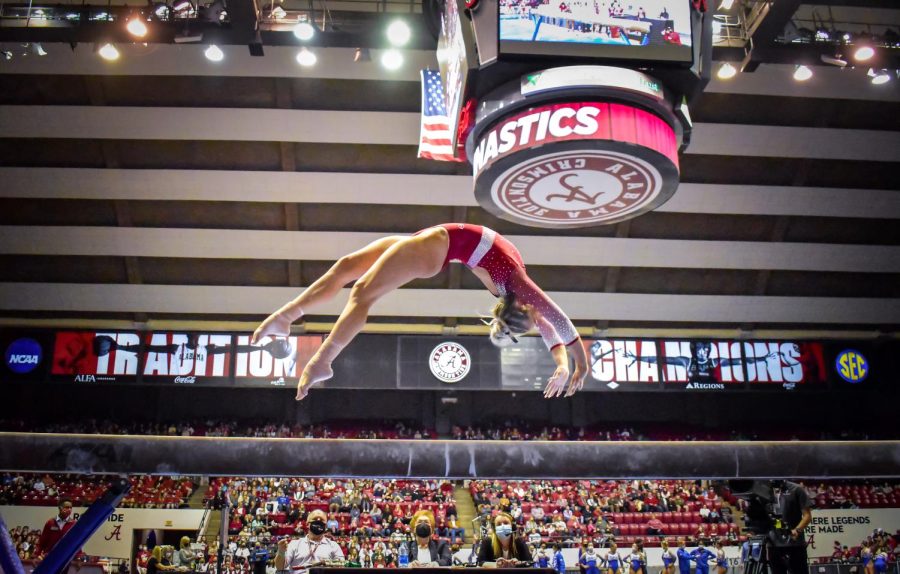 Lexi Graber performs her beam routine against Kentucky in Coleman Coliseum on January 21, 2022.

“I love when I see these ladies feed off a huge crowd,” head coach Dana Duckworth said. “A huge thank you to the energy our students and the crowd brought. It just makes such a difference.”

Junior Makarri Doggette had a night to remember, scoring season highs on all three events she performed. The Ohio native scored a 9.925 on vault and a 9.950 on the uneven bars. Doggette won the event title on both of these events. After a couple of years on the sidelines due to injury, being able to compete on the vault brought a smile to her face.

“Vault has always been my favorite event,” Doggette said. “Landing that and seeing the whole crowd in front of me makes me feel amazing. It makes me feel so special that my whole team just ran up to me [and] basically tackled me.”

However, Doggette’s most impressive routine of the night came on the balance beam. Before her, junior Ella Burgess fell off the beam and scored a 9.200. Doggette wanted to have Burgess’ back following the mistake. Doggette performed a strong routine and scored a 9.80.

“I’m a huge visualizer, so being honest, I was visualizing when it [the fall] happened,” Doggette said. “We have her back and we have anyone’s back.”

Duckworth had full confidence in Doggette’s beam routine because of her “ultra focus” nature and believes she will only continue to get better.

“I was very confident in her ability to come after a fall,” Duckworth said. “Makarri’s only going to continue to get better and better on balance beam because she’s a very aggressive beam worker.”

“I just can’t believe that I’m finally here doing what I’ve wanted to do my whole life,” Hudson said. “I just can’t wait for the rest of the season.”

Alabama will face in-state rival No. 8 Auburn on Friday Jan. 28 in Auburn Arena. The meet is scheduled to start at 8 p.m. CT and will be broadcast on ESPN2.