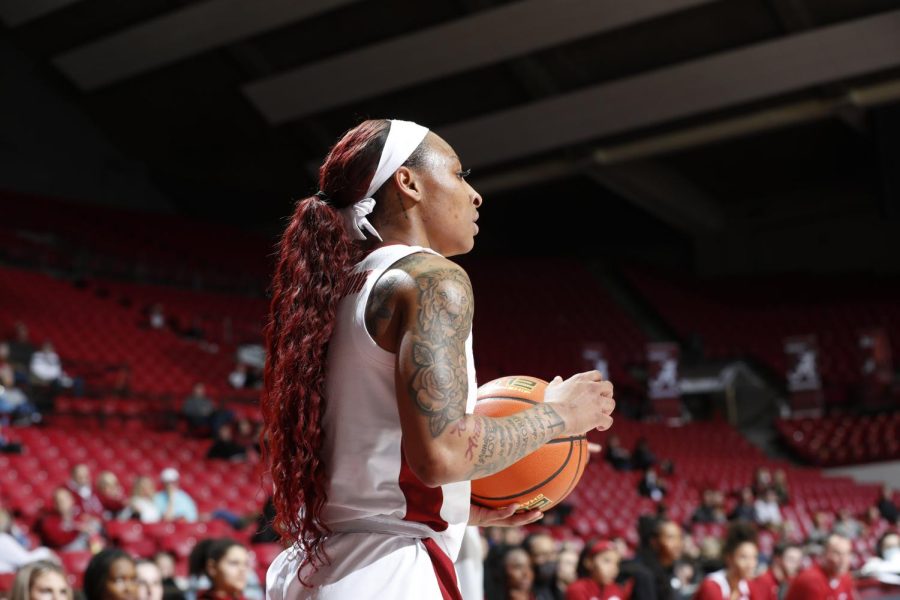 Guard JaMya Mingo-Young prepares to inbound the ball during Thursday's 99-71 loss to the Arkansas Razorbacks.

Alabama was once again missing a crucial piece of the starting lineup. Guard Megan Abrams didn’t play on Thursday because of COVID-19. Guard Myra Gordon made her first start this season in Abrams’ place.

“We’re just taking it one day at a time and trying to control what we can,” Alabama head coach Kristy Curry said of the recent lineup changes.

That’s when the Razorbacks woke up.

Arkansas went on a 16-3 scoring run midway through the first quarter. Alabama didn’t score for almost four minutes. That run helped the Razorbacks go up 21-9 with a minute left in the first quarter. A fast-break layup by Mingo-Young ended the lengthy scoring drought.

But it was too little, too late, and the Crimson Tide was down 10 after the first 10 minutes of action.

Alabama’s perimeter defense got worse as the game went on. With great ball movement, Arkansas created several open looks. At points throughout the second quarter, it seemed like the only thing contesting the Razorbacks’ shots was the rim.

“Just on a night like tonight, I think you just have to credit Arkansas,” Curry said. “I thought they shot the ball really, really well. I thought we had hands up at times, and it’s just one of those nights.”

The Crimson Tide found a way to cut Arkansas’ lead down to four points with just under seven minutes left in the second quarter. Alabama began to make baskets on the offensive end as well.

But the defensive lapses continued. Every time the Crimson Tide made a basket, Arkansas answered. At the end of the first half, the Razorbacks were up 44-27. Arkansas outscored Alabama 23-16 in the second quarter.

The Razorbacks were 4-for-7 from 3-point range in the second quarter.

The massive mountain created by Arkansas’ effective perimeter shooting was too much for Alabama to overcome. The Razorbacks shot 58.8% from two-point range in the third quarter. Overall, Arkansas was 65.6% from the floor in the second half.

The shots were raining down. Just not for the Crimson Tide. Arkansas finished the game with 15 3-pointers.

Mingo-Young finished as the top scorer for Alabama with 22 points and 5 rebounds. Fellow guard Brittany Davis was right behind her with 20 points and 8 rebounds.

Davis shared how the team plans to bounce back from this loss.

“Regrouping, just going back and fixing what we can, but move forward,” Davis said.

“There’s a lot of basketball to be played, and I believe in this team and who they can be, and we’re just going to stick together and stick with the plan,” Curry said.

The Crimson Tide will travel to Auburn, Alabama, to take on the Tigers on Sunday. Tipoff from Auburn Arena is scheduled for 3 p.m. The game will be broadcast on ESPNU.