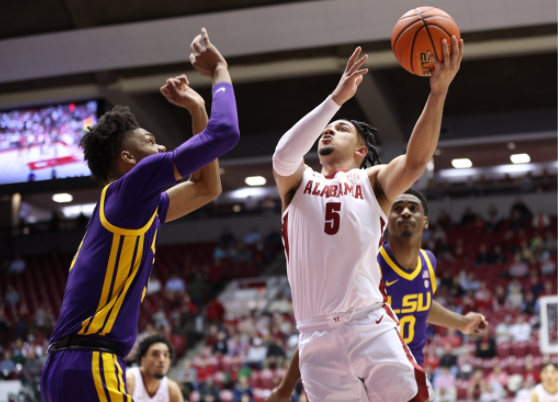 Guard Jaden Shackelford (5) lays the ball up in Alabama’s 70-67 win over No. 13 LSU Wednesday night.

The Crimson Tide is back on top.

It’s been a long 14 days since the Crimson Tide beat Florida in Gainesville.

“We needed to get back on a winning streak,” Alabama head coach Nate Oats said. “We didn’t play particularly well, but our guys fought and battled. I liked where our attitude was.”

Only six players scored for the Crimson Tide. Guard Jaden Shackelford led the way with 26 points and four steals

Guard Jahvon Quinerly came off the bench for the first time this season, but it didn’t slow him down. He finished the game with 17 points.

Quinerly said it was a “mutual decision” for him to start the game on the sideline.

“It was really a mutual thing,” Quinerly said. “Losing three games in a row is tough. Last year, I was successful in that role. I just want to win basketball games.”

“I think he’s been trying to play hard,” Oats said. “Some guys are more well suited to come off the bench. He brought it up to me. I thought he came in and made some really good plays. He looked better tonight.”

“There was a lot of questions about our toughness,” Shackelford said. “It gives us confidence going forward. Just because we don’t make shots, it requires us to go down there and get stops. It’s a game of runs. You gotta stay together and find a way to dig it out.”

With the shots not falling, the Crimson Tide fought its way into the paint and forced LSU to commit 25 fouls. Even though Alabama missed 11 free throws, it made 21 in the process.

“A lot of people say we live and die by the three,” Quinerly said. “But we got some big stops. It was a huge win for the program.We gotta play physical. That’s the only way you can win games. We need to attack the home court, not protect it.”

The Tigers were without guard Xavier Pinson, who missed the game with a knee injury. In his place, LSU was a two-man show. Forward Tari Eason and guard Brandon Murray combined for 45 points and 16 rebounds. Both players committed four crucial turnovers.

With LSU coming into the game as the best defensive team in the country, it was expected that Alabama would struggle with the Tigers’ scheme.

Points were hard to come by in the first half. They were tied at 21 with under five minutes left. Alabama led 33-28 before Eason finished the half with a 4-point play to trim the Crimson Tide’s lead to one going into the break, 33-32.

Seven of Alabama’s 10 first half field goals came from beyond the arc. The second half was a different story. Alabama was 0-for-15 from 3-point territory.

LSU secured its only lead of the second half at the 15:21 mark, leading 40-39. That’s when the Crimson Tide caged the Tigers.

In typical fashion, Alabama took its foot off the gas, and LSU took advantage. The Tigers went on a 14-1 run to even the score at 58 apiece with under five minutes to play.

The Crimson Tide dug deep and went on a 10-2 run to take an eight-point advantage with 1:22 to go.

After some missed free throws down the stretch, LSU guard Eric Gaines had a shot to tie the game. But Gaines missed, and Alabama got back in the win column for the first time in two weeks.

Oats said he isn’t glad that his team struggled to knock down open shots in the second half, but it provided an opportunity to improve in other areas.

“I do think it gave our guys an opportunity to win the game on the defensive end,” Oats said. “If we can get like that, we can win a lot of games.”

After snapping its three-game losing skid, Alabama has an opportunity to start a winning streak if it can take down the bottom two teams in the SEC: Missouri and Georgia.

Saturday’s game in Tuscaloosa will be a rematch with the Missouri Tigers, who beat Alabama 92-86 in Columbia just 11 days ago.

Tipoff is set for 5 p.m. CT on the SEC Network.