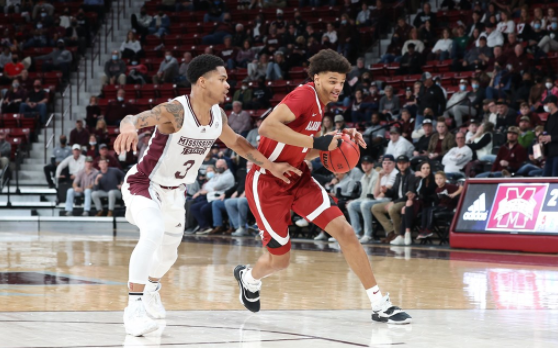 The outlook of the Alabama basketball season is now in question.

The Crimson Tide lost their third consecutive game in the last 10 days to the Mississippi State Bulldogs, 78-76, at Humphrey Coliseum in Starkville, Mississippi, Saturday evening.

“Tough loss,” Alabama head coach Nate Oats said. “I thought guys fought pretty hard for most of the game. We were up one on the glass at the under-eight media timeout, and then after that we got out-rebounded by 12. That’s really what the game came down to. It’s hard to win a game when they’re getting half of their misses. We’ve got to show some toughness about us, and we have to do it for 40 minutes.”

The Crimson Tide fouled from the first to the last whistle. Mississippi State attempted 38 free throws and converted 28 of them.

“We’ve got guys unnecessary fouling,” Oats said. “They’re really hurting us. Our bigs tend to be in foul trouble. Those guys got to stay out of foul trouble.”

The offense is still in a rut. The Crimson Tide shot just 39% from the field and 8-for-29 from deep.

Mississippi State guard Iverson Molinar was his usual self for the Bulldogs. He finished the game with 24 points, six rebounds and four assists.

Molinar was going to get his buckets. The problem for Alabama was when everyone around him was cashing in as well.

Forward Garrison Brooks had one of his best performances of the season, with 16 points and 10 rebounds. Fellow forward Andersson Garcia put together a big effort, finishing with eight points and seven rebounds. Guard Shakeel Moore had 15 points and five rebounds.

There weren’t many pretty stat lines for the Crimson Tide. Guard Darius Miles was solid, with 14 points and six rebounds. Jaden Shackelford scored 14 in the first half, but shot a poor 1-for-6 in the second half.

Saturday saw the return of forward James Rojas, who had not played in a game all season. He showed a lot effort in 17 minutes, scoring six points and adding two steals and two rebounds.

“I thought Rojas gave us some good minutes,” Oats said. “We were only going to use him in case of an emergency, but we ended up in some foul trouble. He played hard. He brings some toughness to the team.”

The two closest schools in the SEC felt each other out for most of the first half.

After 10 minutes of action, the game was deadlocked at 22.

The game still had no separation in the second half. The Crimson Tide and Bulldogs were knotted up at 55 apiece with 11:25 to play.

Then there were two brief spurts. Alabama went on a 5-0 run capped by a step-back JD Davison triple.

With 94 seconds left, the Bulldogs led 75-67. As usual, the Crimson Tide made one last run at it.

Miles and Keon Ellis each knocked down 3-pointers, and Alabama trailed by just 2.

After two free throws made by Moore, Ellis was fouled on a 3-point shot that almost turned into a 4-point play.

A Garcia miss at the line led to one last shot for Ellis, but it rimmed out.

With that, the Crimson Tide’s hopes of repeating as SEC regular-season champions may have rimmed out as well.

“We’re behind the eight ball in a bad way,” Oats said. “It’s disappointing. I thought we had a team that could compete for a league title. LSU is coming Wednesday. They’re the No. 1 defense in the country. Winning in this league is hard. Losing is easy.”

LSU is the next opponent for the Crimson Tide. The 12th-ranked Tigers come to Tuscaloosa on Wednesday, Jan. 19. The game is set for 6 p.m. CT on ESPN2.