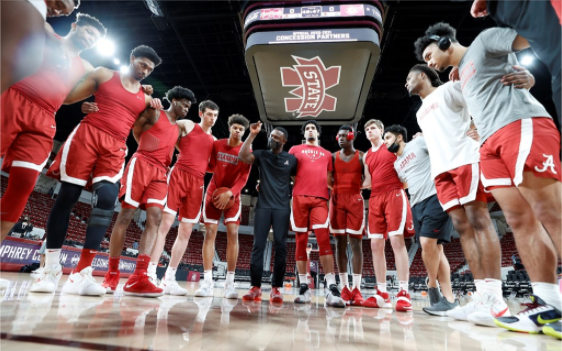 The Alabama men’s basketball team gets ready before its game at Mississippi State on Feb. 27, 2020.

“Big game for us after losing two in a row,” Oats said. “If we’ve got any chance to try and compete for an SEC championship, this pretty much turns into a must-win at this point.”

“Bringing it every game is crucial,” Alabama forward Noah Gurley said. “Coach keeps telling us that winning is hard. It’s not an easy thing to do. So we got to have that fighting spirit throughout the whole game.”

The Bulldogs are currently ranked No. 41 by KenPom and have been very good on the offensive end, ranking 25th in offensive efficiency.

“Molinar is one of the best guards in this league,” Oats said. “He can go for 30 on any given night.”

Mississippi State has a lot of weapons in the paint. Forwards Tolu Smith, Garrison Brooks and D.J. Jeffries combine for almost 36 points and almost 20 rebounds per game. Smith is expected to play after a bout of COVID-19. Brooks transferred to Mississippi State from North Carolina, where he played four seasons. He averaged 16.8 points and 8.5 rebounds in Chapel Hill in 2019-20.

The Bulldogs also have forward Javian Davis, who spent 2019 at Alabama.

“I think he’s playing really well for them,” Oats said of Davis. “I like him. He’s a good kid. When we see him, we still talk. And I think he’s got friends back here. I hope he does really well except for the two games he plays against us.”

All of this size leads to excellent rebounding. Mississippi State is 10th in the NCAA in rebounding margin, averaging nine more rebounds than its opponents per game.

“They’re one of the best rebounding teams in the country,” Oats said. “We’ve struggled at times to rebound the ball, which is a major concern going into this game.”

The Bulldogs have been somewhat of a surprise so far this season. Mississippi State was projected to finish eighth in the SEC, and they are off to an 11-4 start, 2-1 in the conference. The Bulldogs lost three nonconference games to Louisville, Minnesota and Colorado State.

In SEC play, Mississippi State has wins over Arkansas and Georgia. However, the Bulldogs lost to Ole Miss 82-72 in Oxford.

Head coach Ben Howland has been a winner everywhere he’s been. Howland has a career record of 526-294 at Northern Arizona, Pittsburgh, UCLA and now Mississippi State. He has taken the Bulldogs from being an abysmal program to a 127-86 record over the past seven seasons. Mississippi State made the NCAA Tournament in 2018-19 as a five seed.

The Crimson Tide went 3-0 against the Bulldogs last season, including clinching the SEC regular-season title at Humphrey Coliseum in Starkville, Mississippi. Alabama also thrashed Mississippi State 85-48 in the quarterfinal of the SEC Tournament.

“We beat Mississippi State three times last year, so they’re going to come ready to play,” Oats said. “They’re looking for revenge. We clinched the regular season title on their home floor, which I’m sure didn’t sit well. We’re gonna have to play hard for a full 40 minutes. They’re a good team. It’s gonna be a tough game, especially on the road. So our guys have to come ready to compete.”

Tipoff from Humphrey Coliseum in Starkville, Mississippi, is set for Saturday at 5 p.m. CT on SEC Network.