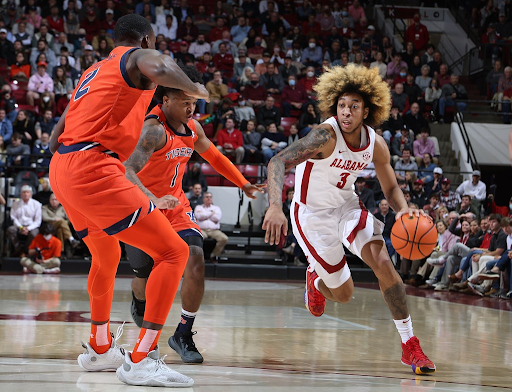 After an unbelievable late game effort, the No. 24 Alabama Crimson Tide (11-5) still fell four points short of the No. 4 Auburn Tigers (15-1), losing 81-77 on Tuesday night at Coleman Coliseum.

The Crimson Tide trailed 73-59 with under eight minutes to play, but after a 14-0 run Alabama tied the game with a dunk from forward Darius Miles with 4:04 remaining.

Auburn finished strong, knocking down its final four free throws to win in a raucous environment.

“I thought our guys fought hard at the end to get back in it,” Alabama head coach Nate Oats said. “I’ve got a lot of respect for them [Auburn]. We needed to maybe play our best game of the year to win that one, and we didn’t.”

Auburn forward Jabari Smith finished the game with 25 points, seven rebounds and four blocks. Guard Wendell Green Jr. held his own in the backcourt, scoring 19 points — some in ridiculous fashion. Miles, who guarded Smith for most of the game, said he’s a challenge.

Auburn guards K.D. Johnson and Allen Flanigan were key contributors as well. Johnson scored 13 and was the glue for the Tigers’ defense, grabbing eight rebounds and three steals. Flanigan made the shots when Auburn needed it most.

“I didn’t think we improved a lot from Saturday on the defensive end,” Oats said.

For the Crimson Tide, five players scored in double-digits, but it wasn’t a pretty offensive showing. Guards Jaden Shackelford, Jahvon Quinerly and Keon Ellis shot a combined 9-for-38 from the field.

Forward Juwan Gary could only play six minutes because of constant foul trouble.

The contest began as expected with the two teams trading baskets. The game was tied at the 15:53 mark. Auburn went on a 14-5 run late in the first half to break the tie, and the Tigers led 34-25 with just under four minutes left until halftime.

Auburn guard Devan Cambridge put a layup in just before the buzzer to give the Tigers a 40-35 lead at halftime.

The first 12 minutes of the second half was all Auburn. Smith and Green both were scoring at ease to race out to the Tigers’ biggest lead of the game, 73-59.

That’s when something clicked for the Crimson Tide. Alabama showed its true potential on a 14-0 scoring surge that was emphasized with a poster dunk by guard JD Davison on Auburn forward Walker Kessler.

Davison ignited the crowd and his team, but the win is what mattered.

“I think we got tighter as a group,” Davison said. “This rivalry means a lot to me. But it’s just another SEC game that we needed.”

It was tied at 77 for almost a full minute when Quinerly hoisted a 3-pointer that rimmed out. On the ensuing rebound, Ellis fouled Flanigan on the trap and sent him to the line where he knocked down both.

On the next possession, Shackelford fired a pass to a wide open Quinerly in the corner, but he passed up on the shot and attempted a contested layup instead.

Flanigan knocked down the next two free throws to put the game on ice and move the Tigers’ winning streak to 12.

“I was proud of our guys for not quitting,” Oats said. “We need to have that same sense of urgency for the full 40.”

The Crimson Tide will attempt to play hard for a full 40 minutes when it heads down Highway 82 for a clash with the Mississippi State Bulldogs in Starkville, Mississippi, on Saturday. The game is at 5 p.m. CT on SEC Network.