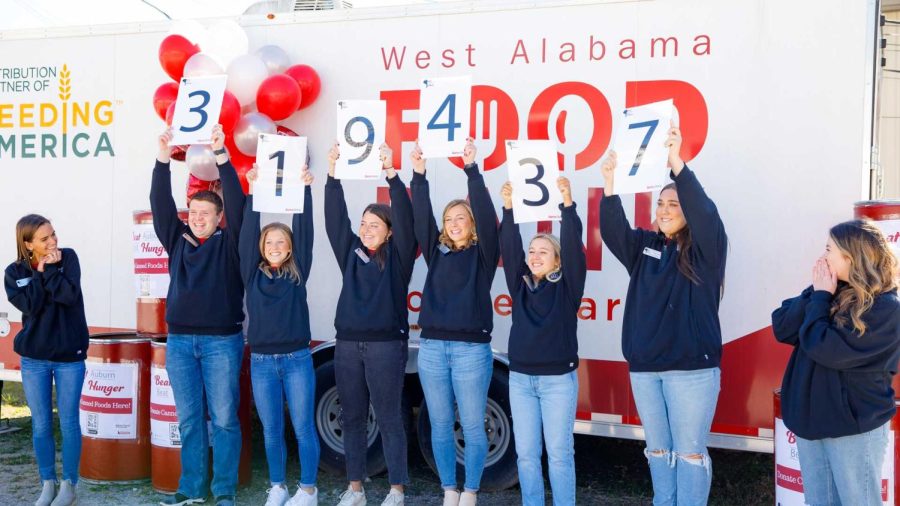 The rivalry competition, which leads up to Iron Bowl weekend, was started in 1994 by the UA Center for Service and Leadership and has raised over 7 million pounds of food for families in Alabama.

The University of Alabama’s collected food will be distributed to the West Alabama Food Bank’s nine counties. The food bank has 96 partner agencies that disperse the food to local individuals and families. It also has mobile pantries that will distribute to large groups of people like veterans, homeless shelters and soup kitchens.

“I feel super proud of my team, and I’m so proud of Auburn for how much they raised,” said Olivia Hannum, the Beat Auburn Beat Hunger president and a UA senior majoring in kinesiology. “It means so much more than just a number. It is really exciting to see that we are going to get to serve the state of Alabama in this way.”

Preparations for the drive started in the spring. West Alabama Food Bank collaborated with Auburn University to create a contract that outlined the competition start and end dates and food collection guidelines.

Beat Auburn Beat Hunger hosted a kickoff in front of the UA Student Center with Insomnia Cookies and Rita’s Italian Ice on Oct. 1.

Throughout the next seven weeks, Beat Auburn Beat Hunger hosted percentage nights, events where the organization received a percentage of a person’s order, at local restaurants. They also hosted a giveaway of a football signed by Nick Saban and sold T-shirts.

In the final days of the competition, the event staff stood behind a red table in front of the UA Student Center and encouraged students to donate.