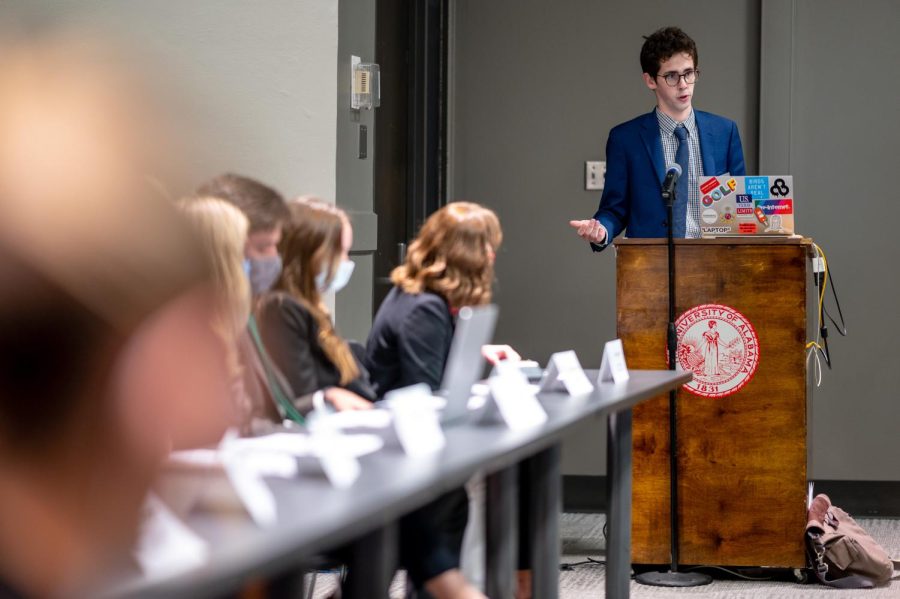 The petition follows an unsuccessful attempt by St. Charles to pass ranked-choice voting legislation in the Nov. 4 Senate meeting. His legislation failed in a 35-8 vote.

Any amendment to the SGA Constitution may be initiated either “by a petition of 5 percent of the student body or by a vote of two-thirds of the Senate.” St. Charles’ petition requires about 2,000 student signatures to appear on the spring ballot.

“We support the rights of our fellow students to voice their thoughts and opinions and welcome all discussion on ways to improve the electoral process,” Davis said.

Ranked-choice voting is an electoral system in which individual voters rank candidates by preference on their ballots. If one candidate wins a majority of the “first-preference” votes, that candidate is declared the winner. St. Charles’ amendment defines a majority as 50% plus one vote.

“[Ranked-choice voting] eliminates the need to vote strategically, by assuring that in the event of a runoff that your vote and voice are still considered, and that the candidate chosen is undoubtedly representative of the majority’s opinion,” the petition reads. “Additionally, it forces candidates to actually run with a meaningful campaign and engage with voters they may or may not have considered engaging with prior to RCV being implemented.”

St. Charles said the petition is a symbol of possible change and reform, even if it is slow to come.

“A huge thing with [the petition] is showing independent students that they’re still a voice, and there’s still a route to change, even if the Senate and other traditional routes for democratic change don’t seem like options right now,” St. Charles said. “There’s still ways that we as independent students can voice our opinions and still participate in student government.”

In retrospect, St. Charles said senators may have been confused about how ranked-choice voting works. Some dissenters said the legislation could be confusing for students.

“This was a very confusing piece of legislation for me … but I’m worried that this will decrease voter turnout because it’s new and confusing and [students] are afraid they’re going to [vote] wrong,” Sen. Lauren Rouse said during the Nov. 4 Senate session.

“We view this as an opportunity to educate the entire student body, senators included, on the benefits of ranked-choice voting and why we should hopefully see it voted on in the spring semester,” St. Charles said.

John Dodd, one of 8 senators who voted in favor of St. Charles’ legislation, said the student petition brings optimism to the cause.

“Even though the constitutional amendment was voted down by the Senate, if we just get the student body opinion on it, we can put it right back on the ballot. We don’t need to vote; we just need the student body’s voice,” Dodd said. “And at the end of the day, that’s what matters, because we’re doing it for them. We’re not doing it for ourselves.”

Sen. Rachel Cordry, who also voted in support of St. Charles’ legislation, said the petition is an opportunity for students to make their voices heard.

“This is a way that students can take the power back and to still make their voice heard,” Cordry said. “If we get that minimum 5% of the student body to sign this petition, students will get a chance to vote on this as a student body in the spring. I think that’s a great way [to show] that we have other routes to democracy at our university, and to make that student body voice heard.”

St. Charles recommends that students who sign the petition opt-in for the email list to stay updated on the legislation.

Senators CJ Pearson and Lauren Rouse both opposed the legislation during the Nov. 4 senate meeting. They could not be reached in time for publication.