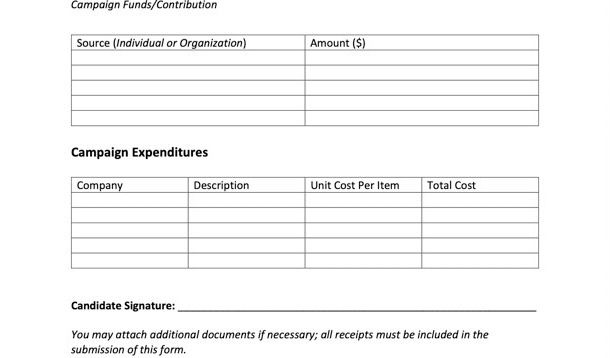 According to the Student Government Association election manual, all homecoming queen candidates must report their campaign contributions and expenditures once a week, each week, from the date they announce their candidacy to the morning of the election — Oct. 19 this year.

The SGA Elections Board must make all candidates’ financial disclosure forms publicly available on the elections website within two class days of receiving them.

The manual defines a candidate’s total expenditures as “all goods and services purchased by or donated (including monetary or in-kind contributions) to a candidate or campaign for use in the election or use in any way furthering that candidate’s campaign.”

Accumulation of 12 points or conviction of a major violation could lead to disqualification.

As of Oct. 16, McLean Moore and Montana Fouts each submitted one financial disclosure form on Oct. 4.

Moore reported $0 in campaign contributions and expenditures on Oct. 4. Her Instagram account, @matchwithmclean, shows photos of her with personalized signs and buttons. Earlier this week, Moore hosted a car painting event in the parking lot of Calvary Baptist Church.

Her Instagram also shows a series of professional-quality campaign videos. None of these expenses have been reported or made publicly available on the election website.

Fouts reported a $200 contribution from the Student-Athlete Advisory Committee on Oct 4.

Savanah Lemon and Noelle Fall are the only candidates who have submitted more than one disclosure form at the time of publication.

Lemon’s initial financial disclosure form included a $400 contribution from her sorority, Alpha Kappa Alpha, which exceeded the spending limit. This form has since been deleted, and the amount was changed to $350 on her most recent report, which exactly matches the limit.

Lemon said the first form “was a misunderstanding and has been edited.” Her current expenditures for buttons, videography and photos exactly match the $350 spending limit.

McLean Moore, Montana Fouts and the Elections Board did not respond to requests for comment.