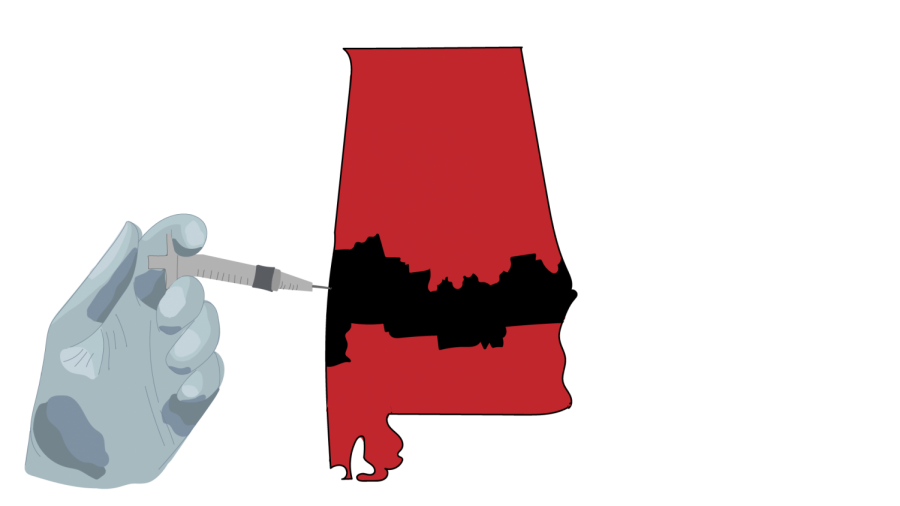 Alabama currently has one of the lowest COVID-19 vaccination rates in the nation, with a mere 38% of Alabamians fully vaccinated. However, the numbers are even lower in some of the state’s more vulnerable communities, including the Black Belt.

Originally named after the dark topsoil found in the region, the Black Belt now refers to 18 counties in Alabama with a majority Black population. The University of Alabama has existing relationships with this community through honors college partnerships, research and development projects.

In some of these counties, vaccination rates are as low as 27%, an especially concerning statistic considering the broader trend of minority communities suffering disproportionately from COVID-19 — a consequence of factors like environmental racism and economic inequality.

The Black Belt in particular has a long history of economic and health disparities. In 2016, Perry County had a poverty rate of 8.1% among white residents but an alarming 32.7% among Black residents.

It should come as no surprise then that these areas, and their Black populations in particular, are experiencing extra challenges as they try to fight back against COVID-19. UA Associate Dean of Research Dr. Hee Yun Lee and her team seek to change that reality.

After recently receiving a $1 million federal grant, these members of the University community are leading a new initiative to vaccinate at least 70% of the Black Belt population by fall 2022. This initiative will hopefully begin in September 2021, increasing the University’s involvement in the Black Belt in a new and measurable way.

Out of everything the University has done during the COVID-19 pandemic, this enterprise will likely lead to the most tangible benefits for Alabama and its people. It isn’t a warning to continue social distancing; it isn’t a $40 handout to vaccinated students; it is a serious and large-scale undertaking to directly heal and educate our state.

Lee’s initiative will fight on two fronts: the education of those who are vaccine hesitant and the distribution and administration of vaccines throughout the Black Belt.

Alabama could reap long-lasting benefits from this educational aspect of the Black Belt vaccination effort, such as a more health-conscious public and a decrease in the rift between establishment institutions and minority communities. This, of course, adds to the benefit of saving lives through increased vaccination rates in the state.

By taking action, the University sets an example for its students, for other universities and for all of Alabama. Such endeavors will attract more good leaders to our campus and our state, benefiting both and creating a positive feedback loop.

This kind of outreach encourages us, as students, to look beyond our studies and toward engagement. It illustrates the impact that our education can create in our communities. It says that a member of the UA community does not just accumulate knowledge; they engage, they innovate and they make real progress.