WGRC will host a pop culture night for a good cause

The Women and Gender Resource Center is teaming up with one student organization to spread awareness on sexual assault and interpersonal violence. 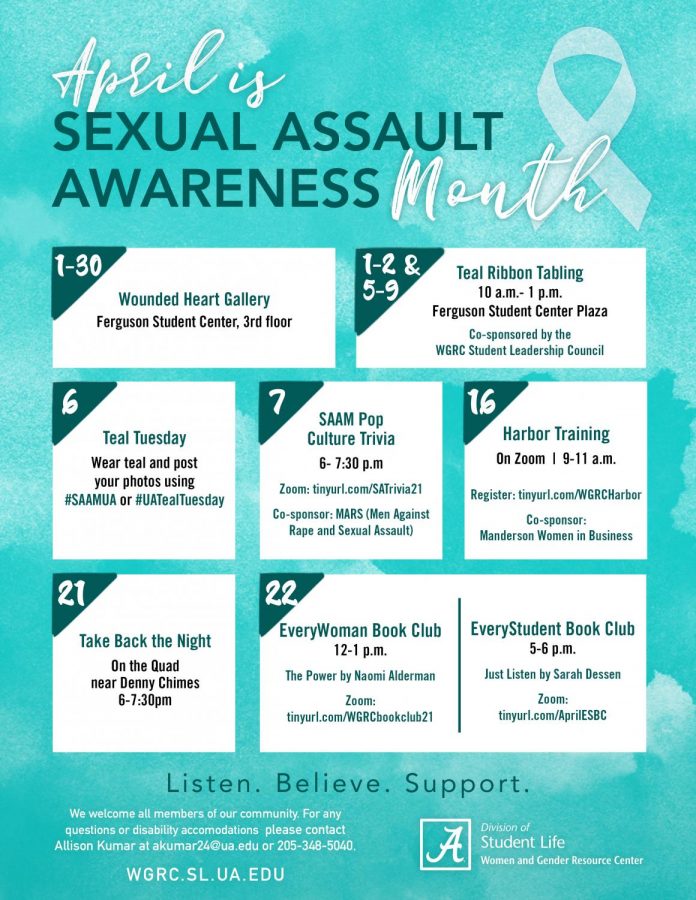 Courtesy of Men Against Rape and Sexual Assault

The UA Women and Gender Resource Center (WGRC) and Men Against Rape and Sexual Assault (MARS), a UA student organization created for male students to learn more about interpersonal violence, want students and faculty members to put their thinking caps on for their upcoming virtual pop culture trivia night on April 7 from 6 to 7:30 p.m.

The student-facilitated event will include trivia that touches on various pop culture topics while advocating for sexual assault awareness.

Students may join at any time and once logged on, people may register individually or as teams.

Allison Kumar, a WGRC peer coordinator, said this event provides students who might not be exposed to conversations on interpersonal violence an opportunity to recognize its prevalence among Americans in a new way.

“We have student leaders who want to facilitate conversations on campus with their peers about interpersonal violence,” Kumar said. “This event is a great way of doing that by talking about something that everyone to some extent has a level of interest in. We listen to music, we see movies and we watch Netflix, so I think for us we are trying to bridge the gap in making this an event that is accessible and approachable to our student population.”

WGRC and MARS plan to start the event off with an introduction on the basis of their organizations and their outreach. The trivia begins shortly after followed by a reflection on the event and what stood out most to participants.

Kumar said though the trivia is lighthearted, the themes presented throughout are not.

She said oftentimes, media and entertainment industries get sexual assault information wrong, and this event is meant to showcase that.

She said the content might be dark, but it will give students an opportunity to change the narrative against victims of sexual assault.

Jack Kappelman, MARS president and junior majoring in political science, is excited to be sponsoring the event.

He said he is thankful the organization is finally able to co-host an event with the WGRC after plans were canceled last year due to the pandemic.

“MARS is an organization that I’ve been super excited to see build a spot for itself on campus, and I think we’ve really established ourselves as a great organization,” Kappelman said. “I think it’s awesome that campus resources like the WGRC actively want to engage us in some of their programming as well. I think it bodes really well for this university that resources here are super active and engaging student organizations.”

Kappelman also said the event on Wednesday night calls attention to conversations students should be having but aren’t.

“Interpersonal violence is taboo, and it’s not the sort of the thing people are equipped to discuss,” Kappelman said. “I think that the resources that UA does offer… provide help and support to those who want it, but I think that a lot of survivors are really dissuaded from pursuing help through resources and reporting it officially because of the stigmas associated with it.”

The trivia night is one of several events WGRC is hosting to promote national Sexual Assault Awareness Month, which began April 1.

The WGRC kicked off its sexual assault awareness events last week with Teal Ribbon Tabling at the Ferguson Plaza and Student Center.

There, student and peer leaders handed out teal ribbons listing the events for this month. Tabling will occur throughout the month of April.

Future events include Take Back the Night, on April 21, an annual event that invites UA community members to join together at Denny Chimes and provide a space for critical self-reflections on experiences related to sexual assault.

Ultimately, Kumar said she hopes these events resonate with students and turn their attention to how they treat others around them.

“Whether or not we know it, we have a friend, a classmate or a family member who has experienced what we’re talking about,” Kumar said. “All of us want to be the most loving and supportive person we can be for those we care about, so it is really needed to be educated on this topic.”

For more information about the trivia night or other WGRC events, visit the WGRC events calendar.