Rian Johnson thrills and kills with “Knives Out” 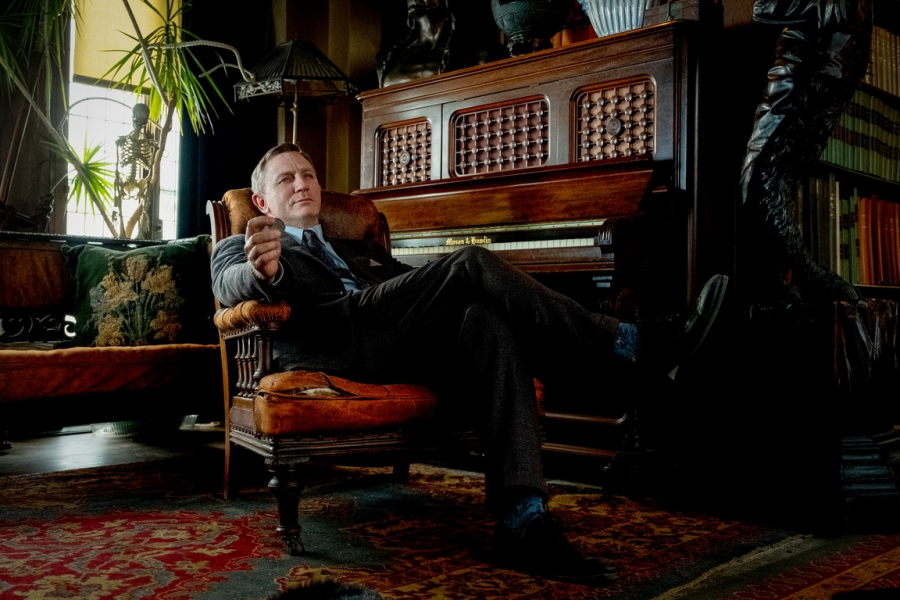 The latest movie to hit the Ferguson Center courtesy of University Programs, “Knives Out” is a stylish ode to Agatha Christie that feels deeply rooted in our modern era.

The “Gentleman Sleuth” is largely a thing of our collective cultural past, despite recent revival attempts by Kenneth Branagh (“Murder on the Orient Express” and the forthcoming “Death on the Nile”) and, strangely, Adam Sandler (“Murder Mystery”). Gone are the days of spooky radio plays with daring, deep-voiced detectives as narrators, and, most damning of all, Sherlock Holmes himself has been relegated to television. The Gentleman Sleuth is dead.

These are all things you might think if you haven’t yet had the pleasure of seeing “Knives Out,” which features Daniel Craig as a private investigator with a Southern accent as thick as the simple syrup in your sweet tea.

In the latest film from Rian Johnson, Craig’s genteel Benoit Blanc becomes embroiled in the family drama surrounding a mystery writer’s death. As charming as Craig’s performance is, he is outdone by his future Bond costar, Ana de Armas, who takes center stage as Marta Cabrera, the deceased writer’s caretaker and only friend.

As Benoit and Marta slog their way through a dense, affluent family’s most private affairs, it becomes very clear that Johnson has heavily updated the “Gentleman Sleuth” genre. Though “Knives Out” may feel like an old-fashioned game of Clue, it has smart phones, alt-right trolls and weed thrown in the mix.

Johnson finds some of the film’s most humorous moments in the often-startling inclusion of the modern world. Toni Collette’s Joni, a daughter-in-law of the dead Harlan Thrombey, is a Gwyneth Paltrow knock-off, complete with a half-baked version of Goop called “Flam.”

“I read a tweet about a New Yorker article about you,” Joni says to Benoit early in the film.

Not to be outdone, Michael Shannon and Riki Lindhome, Harlan’s son and daughter-in-law, have a young son whose apparently racist politics leave the rest of the family seething. As Jacob, their teenager, obsessively checks his phone and calls his cousin a “liberal snowflake,” his parents look on with oblivious admiration.

Joining Shannon and Lindhome are Jamie Lee Curtis and Don Johnson as another couple of Thrombey descendants, with Curtis as Harlan’s devoted daughter and Johnson as a prickly in-law. Chris Evans is Ransom, their moody son with a competitive streak, who is joined by Katherine Langford, another Thrombey grandchild. The intrigue centers around the steady presence of Christopher Plummer, who appears frequently in flashbacks with alternating kindness and fury at his mess of a family. Lakeith Stanfield, Noah Segan and Edi Patterson support.

Beyond the blue-ribbon performances offered by the ensemble cast, Johnson’s film astounds with its absurd competency. Every thread of this complicated, enthralling whodunit is woven together deftly in Johnson’s Academy Award-nominated screenplay, from throwaway props to gasp-inducing twists. Johnson succeeds not only in creating a tapestry of intriguing character developments and clues for the viewer, but also in keeping the full splendor of that tapestry from the viewer until the final moments of the film.

“Knives Out,” with it’s sharply written humor, rich sets and stellar cast, manages the Agatha Christie tribute of Kenneth Branagh’s dreams – just as nostalgic as it is relevant.

University Programs will screen “Knives Out” on Friday at 6 p.m. Students will be admitted for free – plus popcorn and refreshments.