The charm of “The Pirates of Penzance” was in the details 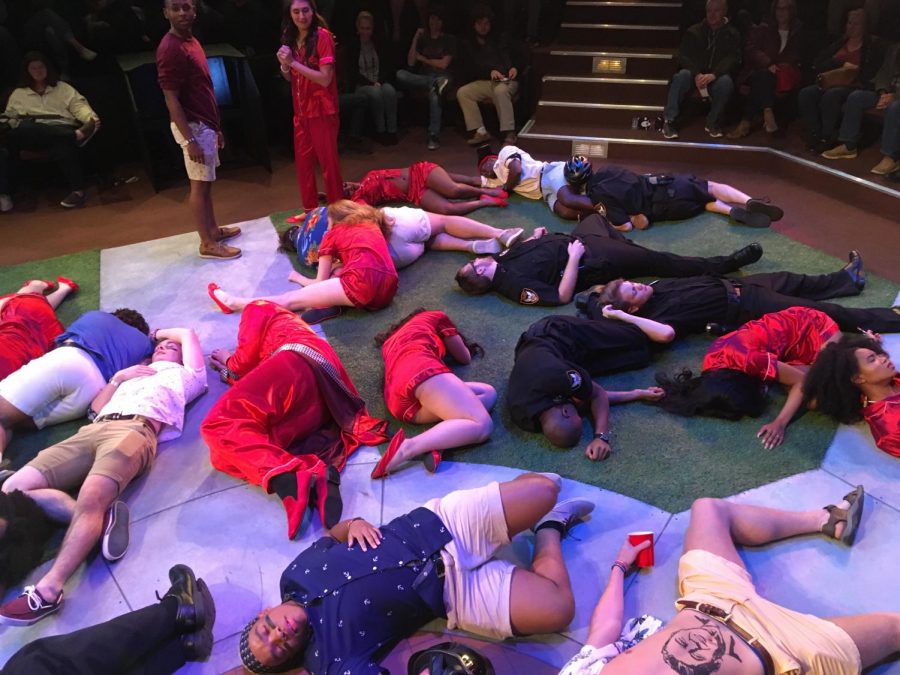 This week, the UA Department of Theatre and Dance presents “The Pirates of Penzance.” The musical has been revamped from the original format to poke fun of campus culture at The University of Alabama with modern twists, lighthearted stereotypes and meticulous attention to detail.

The UA Department of Theatre and Dance took several creative liberties when revamping the humorous operetta “The Pirates of Penzance” by Arthur Sullivan and W.S. Gilbert. The play, which originally takes place in 19th-century England, is about an indentured servant for a band of pirates who falls in love with the daughter of a major general. Thinking that he will be freed on his 21st birthday, the servant has his hopes dashed when the pirates find out that he was born on a leap day, making him technically only slightly over 5 years old.

However, director Alex Ates decided to switch things up. Instead of keeping the original setting, Ates set his version of the musical in a location similar to a pirate ship: a fraternity house at The University of Alabama. The pirates were turned into fraternity brothers, the maid into the house mother, the policemen into modern cops, the Major-General into a university benefactor and the Major-General’s daughters into Capstone Women.

Ates’s version of “The Pirates of Penzance” is made perfect by its diligent attention to detail. The stage was designed to look exactly like the front yard of a fraternity house, complete with white columns, a beer pong table, miscellaneous lawn chairs, red solo cups and the classic black tarp around the side of the yard spray painted with words like “YoHo” and “#Sullivan + Gilbert.”

“My favorite detail is by far both of my costume pieces,” Sam Nelson, a second-year MFA candidate who played the Major-General, said. “The entire costume shop deserves a lot of credit for the meticulous work they do.”

The costumes did contribute heavily to the humor and lightheartedness of the musical. The Major-General wore a baby blue-striped suit for most of the play but changed into a satin crimson pajama set with houndstooth trim during the second act. The frat brothers/pirates were dressed in classic Hawaiian shirts but with slight pirate details like eyepatches and wrist cuffs printed with skulls, reminiscing a pirate-themed swap or date party.

These small details were what truly made “The Pirates of Penzance” stand out, and Ates didn’t just stop with the setting and costumes. The dance numbers included viral dances like dabbing and whipping; characters were constantly taking selfies and scrolling through social media during the performance; and culture references, like White Claws and Roll Tides, were tossed around by the actors.

Reese Lynch, a freshman BFA theatre major who played one of the police officers, said that during the rehearsal process, they would always be “adding new things to the characters and moments onstage. With the cops, we added signs and stuff. We actually made it real sign language, but only people who could sign would know. Just small things like that. Things that add a bit of flavor.”

While the musical made fun of many groups on campus, the stereotypes were so hilariously overexaggerated that it was difficult to take the jokes too seriously.

“Our particular message was clearly responding to Greek culture here at UA,” Nelson said. “But no one in the process set out to make fun of or attack this culture – it was more of an attempt to hold up a mirror for the audience to see our perspective on it, to see it as we see it.”

Melanie Totty, a freshman majoring in theatre who attended the show on Tuesday, loved the commitment and lightheartedness that the musical strived to produce.

“I really love that the theatre department was able to sort of have that level of self-awareness at some of the things around campus that can be a little easy to make fun of,” Totty said.  “I think that’s very interesting, and it’s really good sometimes to have that awareness to be able to kind of make a joke of yourself.”

Ates’s version of “The Pirates of Penzance” was unafraid to take risks and think outside of the box, making it unapologetically different.

“I’m hoping audience members will each take away a unique meaning from their experience,” Nelson said. “But I do hope they see that the stage is a place to go big, be bold, take risks, be experimental and stimulate conversation about the world around us outside of the theatre.”