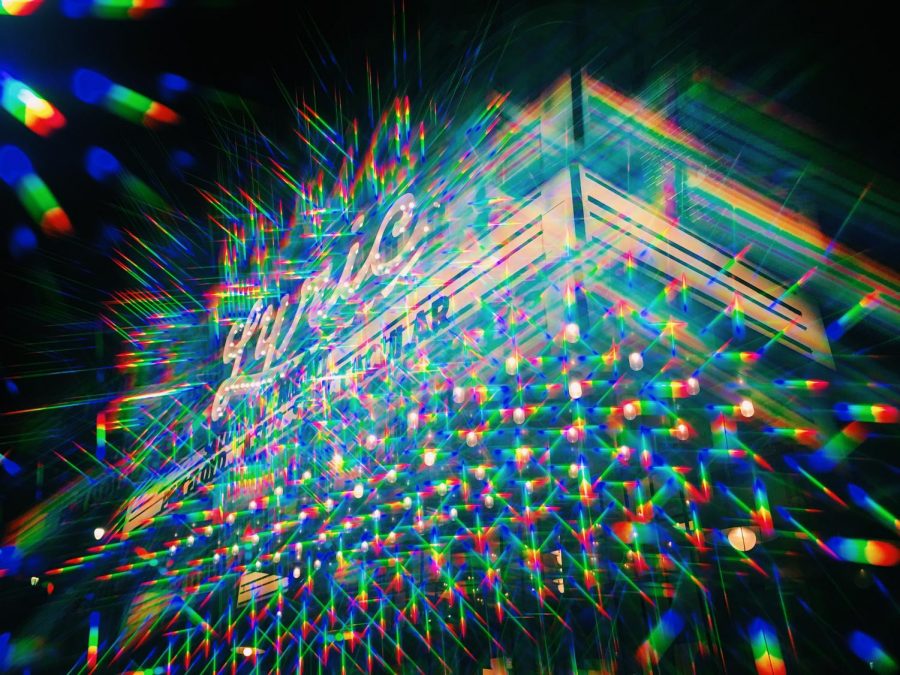 It isn’t a new idea; instead, it’s something out of an episode of “That 70s Show:” an elaborately choreographed laser light display synced with the music of Pink Floyd. In the early-aughts sitcom, the show is called Laser Floyd; now it calls itself the Pink Floyd Laser Spectacular.

The Spectacular recently made its way through two of Alabama’s historic theatres, the Lyric Theatre in Birmingham’s theatre district and downtown Tuscaloosa’s Bama Theatre. Ushers handed patrons two pairs of kaleidoscopic paper glasses – one for the first part of the show and another for the second half.

The Spectacular combines Pink Floyd’s psychedelic, often sad music with beautiful displays of light, music videos and narrative cartoons. The first act of the show runs through each track of the band’s acclaimed 1973 album “The Dark Side of the Moon.” The album lends itself particularly well to communal listening. Produced by Alan Parsons of the Alan Parsons Project, it experiments with synthesizers and tape loops, steeping itself in its own melancholy.

On side one track “Time,” lyricist and bassist Roger Waters confronts his own changing perception of time. Laser accompaniment outlined a day in the life of a nondescript cartoon man, who floats through his day without a change in his expression. It was a placidly unaffected scene that managed to underline the existential fear threaded throughout the song.

“Money,” another album track that one might recognize from regular play on classic rock radio, was punctuated with bright green lasers that combed through the audience and dollar signs that flitted overhead.

After intermission, once the audience had switched pairs of glasses and returned to their seats with drinks in hand, the setlist transitioned into highlights from the rest of the band’s career. A double-feature of “Another Brick in the Wall” showcased the song’s section of “Pink Floyd – The Wall,” a film based on the band’s 1979 rock opera album of the same name. The song, which features children jeering that “we don’t need no education,” was preceded by devilish teachers outlined in crimson beams of light zooming in and out of the show’s large lighting rig.

Between floating bricks that seemed to be duplicated nine times over by the kaleidoscopic lenses handed out before the show, the lyrics to the song’s chorus flickered over the face of the villainous teacher featured in “Pink Floyd – The Wall.”

At the show’s most emotional climax, Pink Floyd’s “Wish You Were Here” played with very little visual accouterments. A lone hand finger-picked along to the song on the outline of an acoustic guitar that floated over the stage. At the song’s final chorus, photos of dead musicians – Janis Joplin, Tom Petty and Prince among them – appeared on screen, garnering cheers from the crowd.

Other laser-lined cartoons swung in and out of songs. During one interlude, two blooming flowers, one phallic and the other yonic, twisted around each other playfully before fully merging, a moment of floral eroticism that transformed into more sprays of light raining down over the crowd. The cartoon man from “Time” seemed to reappear as the protagonist of “Comfortably Numb,” wherein he begged to be sedated by a doctor before spiraling downwards through layers of swirling lights.

The revisiting of Pink Floyd’s music isn’t a new idea, but the Spectacular still finds ways to make the band’s lonely psychedelics seem novel. Part of the show’s effect might simply come from hearing something so perfect at such a high volume, but not enough can be said for the invigorating quality of the lights falling over each audience member at such specific points in Pink Floyd’s catalog.