Jahman Hill gives everything he has to poetry 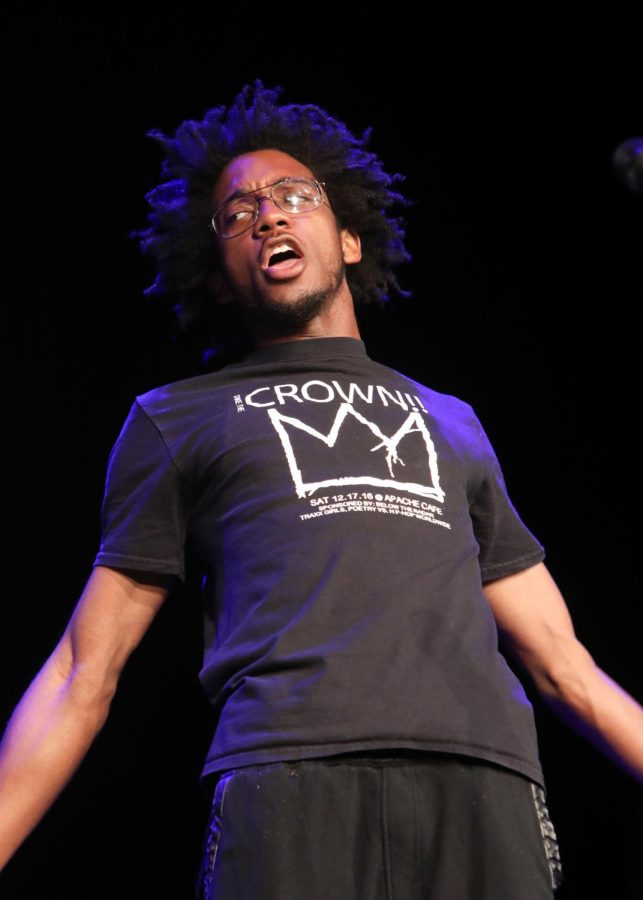 The first annual Black Warrior Poetry Festival opened with a poem from its co-host and co-founder Jahman Hill.

On Friday night, Hill performed his poem “White Heaven” on the stage at the Bama Theatre before welcoming his co-host, Imani Williams, and a slew of other poets to the stage. It was the culmination of months of hard work and planning alongside his friends at the Alabama Student Association for Poetry (ASAP).

But Williams, a senior majoring in public health, knows that staying busy is nothing new for Hill.

“People don’t realize this, but Jahman just finished his thesis a few days ago,” Williams said. “He doesn’t sleep. He works around the clock, but you have to have that drive, hunger and dedication to push out a product like [the Black Warrior Poetry Festival].”

Hill, who was born in New York and raised in Kansas, arrived at the University as a junior. After completing his degree in international studies, he dove straight into graduate work. In May 2018, Hill checked a master’s degree in communication studies off of his list. Next month, he’ll graduate with a second master’s degree in women’s studies.

Education is a priority in more than one way for Hill, who also conducts poetry workshops as a part of his outreach with ASAP, a group that Hill co-founded. When starting out with ASAP, Hill said one of his priorities was instigating outreach opportunities within the Druid City community. One of those opportunities came in the form of The Brown House, a Northport nonprofit that works to support children and parents in the West Circle area.

Three students who participated in The Brown House workshops also performed at the Black Warrior Poetry Festival, with a poem inspired by Maya Angelou’s “Still I Rise.”

“Teaching has always been very important to me, especially in terms of poetry and social justice,” Hill said. “I feel like those are conversations that we can generate with youth, because they should be having these conversations about race, about gender, about sexuality, because they’re going through the same things.”

As much as Hill has brought to the University, it isn’t as if it has given him nothing in return. In fact, Hill’s new one-man show “Black Enough” made a special debut off-Broadway as a perk of the University renting the space for the theater department’s senior showcase.

Hill’s show initially focused on how to beat death, but he began to realize that “85%” of the show was shrouded in the idea of death. As Hill refocused his performance, he decided to focus on “The Flourish,” a celebration of blackness meant to lift up viewers rather than drag them down.

“I believe black people are infinitely possible beings who can do anything,” Hill said. “It’s really based off this idea that if there is an essence of black people, it’s that we are amazing and awesome individuals, and we should always take time to recognize that and realize that. We’ve always been enough… There’s no need to authenticate our blackness.”

Hill is all about executing a plan to perfection, which might be why “Black Enough” has already found a packed theatre in Birmingham, a night at the Allen Bales Theatre and an upcoming gig in Huntsville.

ASAP president Kaitlyn Cahill, a sophomore majoring in business management, has worked with Hill all year on projects for ASAP. She knows firsthand how hard Hill works and how easy he makes it look.

“Jahman is so great,” Cahill said. “He just has a vision, which sounds kind of cheesy, but he’s very charismatic, very goal-driven.”

Williams, another ASAP member, also sings Hill’s praises, even if she’s beaten him at their last three poetry slams.

“Now that I know him, it’s like, ‘You’re just Jahman. I don’t know why people put you on this pedestal, but I’ll kick it off,’” Williams said. “‘You need to know I beat you three times, so that your ego is where it needs to be.’ But he doesn’t even have [an ego]. He’s so great. He’s a wonderful mentor and friend, and I’m grateful to have him in my life.”